My favorite Maryland note of all time.

My latest adventure in numismatics landed me in Baltimore, Maryland, week before last to visit the headquarters of Coast to Coast Coins. There I met with Ken Pines, who generously agreed to allow me to come and scan his collection of Maryland obsolete paper money for inclusion in the next Whitman Encyclopedia of Obsolete Paper Money. Hitting shelves this holiday season, volume 8 will encompass the states of Delaware, Maryland, and Virginia, as well as the District of Columbia. The region is obviously one that is rich with history, both numismatically and otherwise, and so I was greatly looking forward to seeing such a large collection of paper money in person.

The history of numismatics is what draws my interest most, and the vignettes found on obsolete paper money are saturated with it. You can learn much about where a note was issued purely from the images found on the note itself—agriculture, shipbuilding, milkmaids, gods and goddesses, mills, bank buildings, animals, industry. Even details such as where a note was payable, or in what funds, add to the intrigue of this particular bank-note-issuing era.

And I was certainly not disappointed. The experience was a delight—Ken and his staff at Coast to Coast were hospitable and friendly, and as I arrived with scanner and laptop in tow I was met with stacks of paper money albums, all ready to be documented. 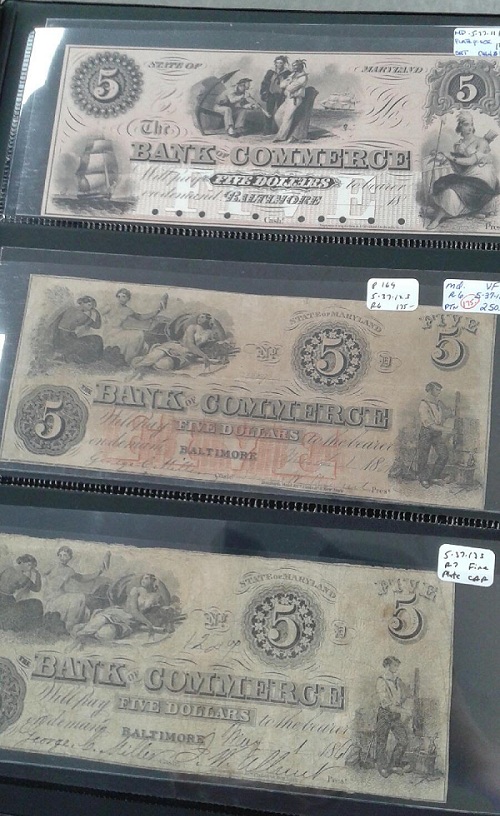 A page in one of many albums.

This was my second opportunity to scan obsolete bank notes, as I had taken images of certain Illinois issues while at the ANA in Rosemont last year (2015). This, however, was a much larger undertaking. There were at least 20 albums, each filled with notes spanning from the late 1790s to the 1860s: from bank notes and merchant scrip to turnpike vouchers and Civil War–era issues. I would have two days to document the lot, and with a will I rolled up my sleeves and set to work.

Luckily Ken’s collection was well-organized, allowing me to get through 1,200+ notes during my time there. The only thing I was unable to scan were the bigger, four-note uncut sheets, as my portable scanner was a tad too small to manage them. (The two- and three-note sheets, however, just barely fit!) 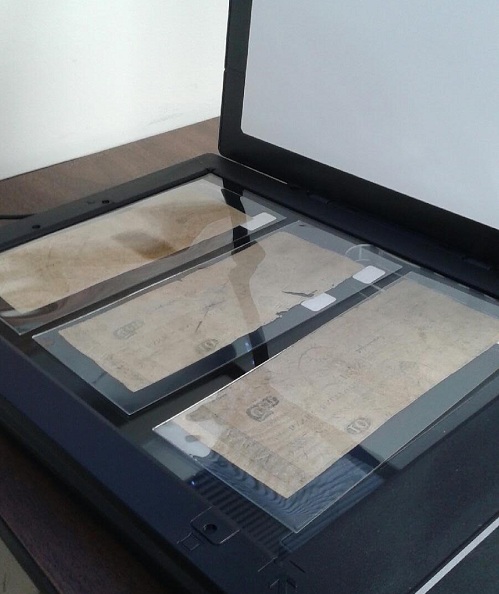 Scanning three at a time certainly sped up the process.

It is always a bit surreal handling paper money—you get so used to seeing the images digitally, where they seem solid, huge, and strong. And while obsolete paper money is considered to be “large size,” it is by no means solid. Many of the notes were as thin as tissue paper, some completely translucent. Add to that the fact that they are 150+ years old and in some cases one-of-a-kind, and you have a high threshold for caution.

I was able to scan most of the notes in their plastic holders, but a few had to come out to capture the full image. And while the reverence with which I handled them was due mostly to their age and fragility, there was also a sense of muted wonder to it, contemplating who else had held this piece of paper in centuries past—from the 19th and 20th centuries, through to the 21st. Printers taking the paper off the press…bankers signing and cutting the notes from sheets…merchants and everyday people passing the bills in commerce, stuffing them in their wallets or under pillows…numismatists through the years, admiring the artistry. And now me, archiving the images as a tiny slice of time. 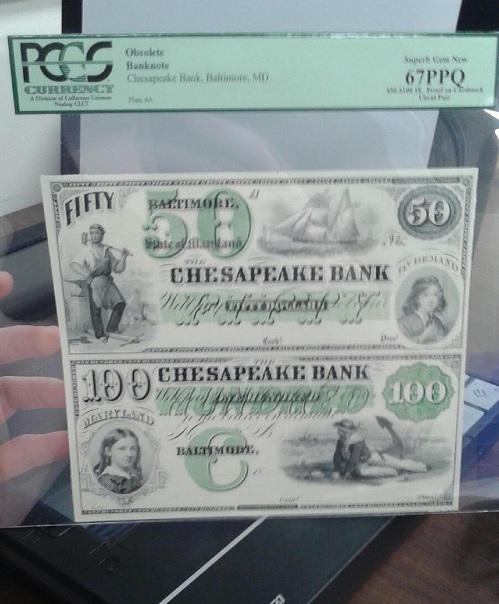 It’s not every day you get to archive a collection of historical treasures. I hope I have the opportunity to do so again in the future!