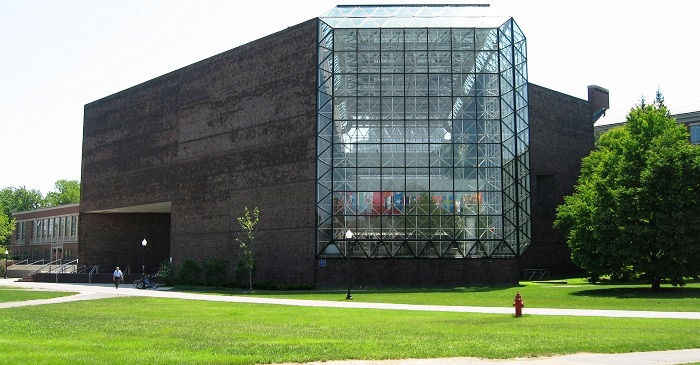 Wilson Commons, designed by I.M. Pei, on the campus of the University of Rochester. (Photo by URJeff).

This past week my brother-in-law, an architect, visited for a couple days, and at one point we talked about the famous Chinese-born and MIT- and Harvard-trained architect I.M. Pei. “He designed the student commons at my college,” I mentioned.

I’ve probably mentioned that to him a hundred times over the years.

Every University of Rochester student since 1976 remembers Wilson Commons as the center of life on the school’s main campus. Five stories high, wonderfully open with 18,000 square feet of glass windows like a huge honeycomb, and those spiral staircases . . . the amazing building lived up to Pei’s prediction:

Pei described his philosophy and approach to architecture:

At one level my goal is simply to give people pleasure in being in a space and walking around it. But I also think architecture can reach a level where it influences people to want to do something more with their lives. That is the challenge that I find most interesting. 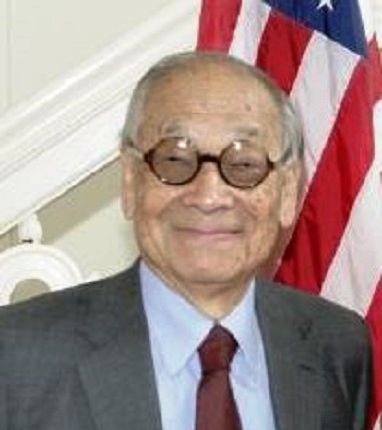 One of my college friends, Renan Levine, now a professor at the University of Toronto, recalled Wilson Commons:

I don’t think any architect affected my daily life and routine more than I.M. Pei—at least for my three years at the University of Rochester. Those years included behavior shaped by architecture more than the other years of my life. Pei’s student center isn’t very beautiful and it includes some weirdly shaped rooms, but also sightlines that made it easy to look for friends on multiple levels, intersections / common areas that led to inevitable ‘bumping into’ encounters, and light, airy indoor space even when it was cold outside. It was a favorite pathway and a destination. A place to pass a few minutes, and a place to kill hours. A place to make plans and a place to let plans just work out.

That description matches my memories of Wilson Commons perfectly. I spent many, many hours in the publications offices in the lower level—my extracurricular introduction to the working world of publishing. Wilson Commons is where I started to earn my stripes in magazine, newspaper, and book production.

When I learned of I.M. Pei’s passing, I recalled a numismatic connection that I’d come across while researching for my book American Gold and Silver: U.S. Mint Collector and Investor Coins and Medals, Bicentennial to Date. The following is excerpted from chapter 3, which covers the Mint’s five-year American Arts Commemorative Series gold medallions (minted 1980 to 1984). 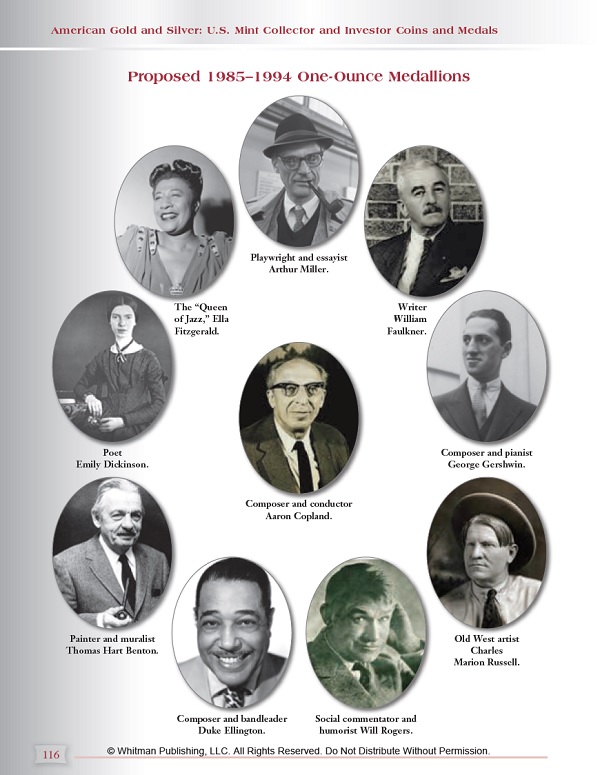 The American Arts gold medallion program ended in 1984. Proposed legislation would have continued the series for another 10 years. Hover to zoom.

1985 and Beyond: What Might Have Been, and What Was to Come

By the end of 1985 the American Arts Commemorative Series had wrapped up and the nation had moved on. When the program started in 1980, the U.S. Mint was slowly getting back into the minting of gold after the long hiatus from 1934 to the early 1970s. When the medallion program ended in 1984, legal-tender coins were back on the table in the form of Olympic commemoratives, which would soon be joined by a $5 commemorative for the Statue of Liberty centennial (1986), then another for the bicentennial of the U.S. Constitution (1987), and many others in the 1980s and 1990s to date. More significantly, the Mint’s new bullion-coin program, the American Eagles, came out in 1986 and quickly grew into what supporters of the American Arts medallions had envisioned in the late 1970s.

An interesting side note to the American Arts story: On February 7, 1985, Representative Jim Leach of Iowa, who had introduced the 1978 legislation that created the American Arts program, proposed an expansion. H.R. 1055 was an amendment to the American Arts Gold Medallion Act that would have extended the series for another 10 years, honoring the following artists—including architect I.M Pei.

The “Queen of Jazz,” Ella Fitzgerald.

Social commentator and humorist Will Rogers.

Leach’s bill didn’t get beyond the House Subcommittee on Consumer Affairs and Coinage, and the curtain officially dropped on the American Arts program. The medallions’ five years on the national stage gave Congress and the Treasury a thorough education in producing, advertising, and mass-market distribution of gold. Next up would be the first of several vastly improved legal-tender bullion coinage series—not just gold coins, but also silver and platinum, destined to capture the public’s attention and sell by the tens of millions. 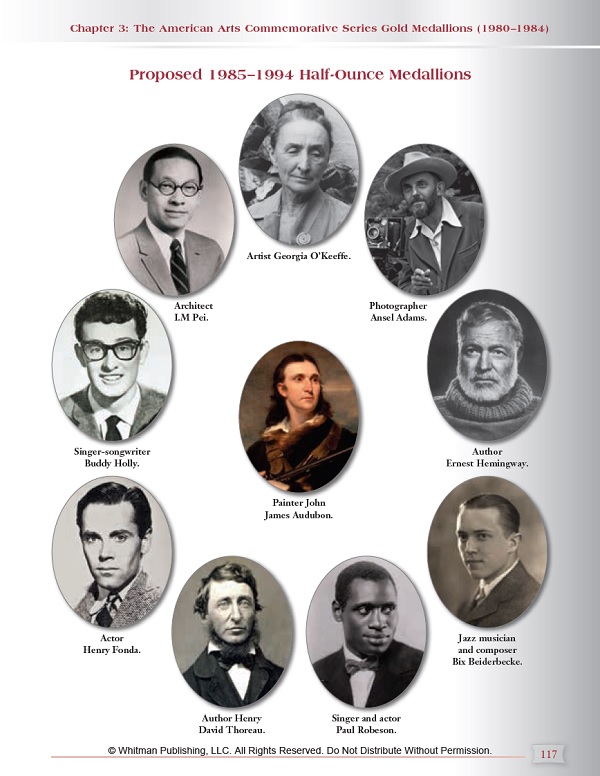 If the proposed expansion had come to pass, the United States would have had a half-ounce gold medal honoring architect I.M. Pei.

The United States never got its I.M. Pei gold medal. But Pei himself earned many gold medals and other accolades—the Gold Medal for Architecture from the American Academy of Arts and Letters . . . the AIA (American Institute of Architects) Gold Medal . . . the Royal Gold Medal of the Royal Institute of British Architects. As his biographer Carter Wiseman said, Pei won “every award of any consequence in his art.”

Fans of I.M. Pei’s architecture, and especially those of us who lived and learned inside the spaces he designed, have a lifetime’s worth of memories. May he rest in peace after a long and uniquely accomplished career.