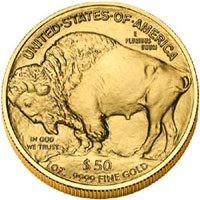 During April 2010, the United States Mint expanded the number of options available to precious metals investors. They continued to offer one ounce American Gold Eagle and American Silver Eagle bullion coins and began sales of the 2010 American Gold Buffalo. This 24 karat gold bullion coin is produced in one ounce size.

In the previous year, the sale of Gold Buffalo bullion coins did not begin until October 15. The fact that the US Mint was able to launch the offering more than five months sooner this year is an encouraging sign that they are catching up with demand for their gold bullion coins.

The table below presents sales figures for US Mint bullion coin sales for the month of April 2010, with year to date sales totals. This report includes bullion coins sales through the authorized purchaser network and does not reflect numismatic product sales.

The US Mint sold 2,507,500 ounces of silver bullion in April. This represents a decline from the prior month when 3,381,000 ounces were sold, and a slight drop from the year ago period when sales of 2,518,000 were recorded. For the year to date, the US Mint has now sold 11,531,000 American Silver Eagle bullion coins. This is solidly ahead of the sales of 9,675,000 recorded through April in the previous year. For all of 2009, the US Mint had sold a record setting 28,766,500 Silver Eagle bullion coins. If this year’s swift pace of sales continues, a new record high for annual sales may be in store.

In a few months, the United States Mint expects to begin sales of 5 ounce America the Beautiful Silver Bullion coins. These coins will feature exact duplicate designs of the quarter dollar coin series and have an unusually wide diameter of 3 inches. The most recent statements from the US Mint indicate that the first coins will be available in mid-summer.