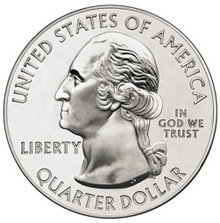 The month of April 2011 will see several eagerly awaited numismatic product releases from the United States Mint. This includes the 2011 Proof Gold Eagles and the first of the numismatic versions of the 2010 America the Beautiful 5 oz. Silver Bullion Coins. A number of major coin shows will also be held.

The month starts with the Whitman Coin & Collectibles Expo, which has now just concluded. Other shows include the Chicago International Coin Fair and Santa Clara Coin, Stamp & Collectibles Expo at mid-month, and the CSNS convention held near the close of the month.

United States Mint product releases will include 2011 sets containing the America the Beautiful Quarters, as well as the bags and rolls for seventh issue of the series featuring Glacier National Park. The 2011 Proof Gold Eagles will go on sale April 21. It is expected that the coins will be available in individual one ounce, one-half ounce, one-quarter ounce, and one-tenth ounce options, in addition to a complete 4 coin set.

On April 28, the collectible version of the Hot Springs ATB Silver Bullion Coin has been scheduled for release. According to statements from the US Mint, these eagerly awaited numismatic versions of the bullion series were struck during 2010, with a mintage of 27,000 per design. The coins will include the “P” mint mark and carry a special finish created through a vapor blasting technique. Pricing and ordering limit information has still not been provided.