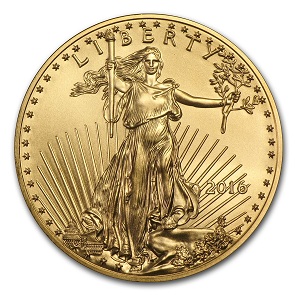 The U.S. Mint’s gold bullion sales took off in April, driven in part by the fact that the value of an ounce of gold increased by more than $72 between the first and last days of the month.

The American Eagle one-ounce gold bullion coin particularly stood out by posting a formidable 93,500 pieces sold to the Mint’s authorized purchasers; this is more than were sold in any month since September of last year, beating even January 2016‘s big debut of 89,000.

Each Gold Eagle option drastically increased its sales this month, except for the 1/10-oz. version, which saw a 26.6% decrease. Interestingly, American Eagle Gold bullion coins have exactly doubled the sales posted by this time last year: the 2016 end-of-April total was 351,000 ounces of Gold Eagles sold, 100% more than the 175,500 ounces tallied at the same time last year.

Sales of the Cumberland Gap 5 oz. silver bullion coins have not moved since April 22. The Mint can sell up to 120,000 of these, however, and set a high precedent by striking 105,000 units of the 2016 Shawnee National Forest issue, so it seems likely that more will be released in the near future.

Silver is currently valued at $17.31 an ounce, while an ounce of gold is worth $1,289, according to the London Bullion Market Association.