Earlier this month, a bill was introduced in the House of Representatives which seeks to authorize a commemorative coin program to recognize the 50th anniversary of the first manned landing on the moon. The program would include several innovative aspects such as the use of a 5 ounce silver coin, a curved shape, and potentially a reverse design which extends over the edge of the coins.

A total of four different commemorative coins would be issued under the program. This would include up to 50,000 $5 gold coins, 400,000 silver dollars, and 750,000 clad half dollars, each issued in proof and uncirculated qualities. The final coin of the program would be 5 ounce .999 silver coin with a face value of $1, struck in proof quality.

The bill requires the coins to be produced in a fashion similar to the 2014 National Baseball Hall of Fame 75th Anniversary Commemorative Coins, with a convex reverse and concave obverse. The shape would allow the reverse to more closely resemble the faceplate of an astronaut’s helmet and the obverse design to have a more dramatic display.

It is also included as the sense of the Congress that, to the extent possible without significantly adding to the price of the coins, the coins should be produced with the design of the reverse continuing over what would otherwise be the edge of the coins, such that the reverse design extends all the way to the obverse design. 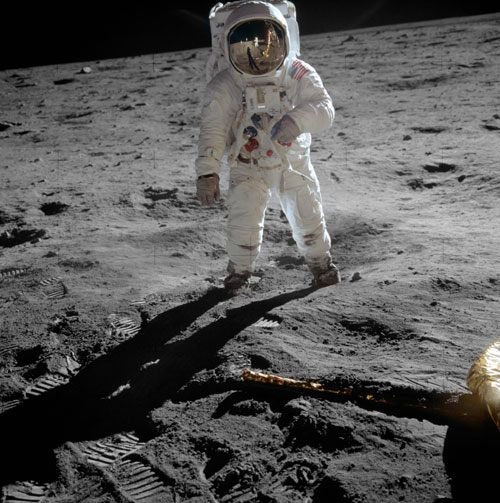 The legislation specifies that the common reverse design of the coins shall be a representation of a close up of the famous Buzz Aldrin on the Moon photograph taken July 20, 1969, showing just the visor and part of the helmet of astronaut Edwin Eugene Buzz Aldrin, Jr., in which the visor reflects the image of the United States flag and the lunar lander.

The common obverse design of the coin will be emblematic of the United States space program leading up to the first manned moon landing. This design will be selected through a juried, compensated competition. Design proposals may be accepted from artists and engravers of the United States Mint as well as members of the general public.

Under the act, the coins would be issued only during the one year period beginning on January 1, 2019.

The sales prices for the coins would include surcharges of $50 per 5 ounce silver coin, $35 per gold coin, $10 per silver dollar, and $5 per half dollar. The surcharges would be distributable one-half to the Smithsonian Institution’s National Air and Space Museum’s Destination Moon exhibit, one-quarter to the Astronauts Memorial Foundation, and one-quarter to the Astronaut Scholarship Foundation.