The Royal Australian Mint have launched (27th March) a new commemorative coin which marks the Centennial of the Australian New Zealand Army Corps or known more familiarly as ANZAC. This new triangular coin commemorates the Centenary of the First World War, as well as pays tribute to those who have served and sacrificed for Australia in all wars, conflicts and peacekeeping operations.

The 2014 $5 Silver Proof Triangular Lest We Forget Coin is the first of a program of coins to mark significant events and dates from Australia’s military history. The Royal Australian Mint has partnered with the Department of Veterans’ Affairs and the Australian War Memorial for the 2014-2018 Anzac Centenary period, to produce this collection of commemorative coins. 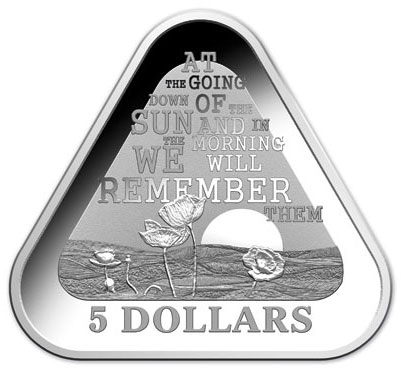 The reverse side of the coin features poppies known for flourishing amidst the desolation of war and between the graves of the fallen, set against a sunset over the low-rolling hills of the Western Front. The poignant words within read, “At the going down of the sun and in the morning we will remember them.”

The obverse includes the current portrait of HM Queen Elizabeth II designed by sculptor Ian Rank-Broadley and used on all Australian circulation and commemorative coins since 1998.

The Anzac Centenary themes planned for commemoration were also revealed today and will be officially launched on the evening of the 27th March along with the triangular coin by Senator, the Honourable Michael Ronaldson, Minister for Veteran’s Affairs and Minister Assisting the Prime Minister for Centenary of ANZAC, Air Chief Marshal Angus Houston AC, AFC (Ret’d) and Australian War Memorial Director Dr Brendan Nelson.

For more information on this and other coins offered by the Royal Australian Mint, please visit  their website at: https://eshop.ramint.gov.au/2014-5-Silver-Triangular-Coin/210279.aspx Information offered in English, internationals orders dispatched.