The Royal Canadian Mint have issued a unique coin both in terms of the subject as well as the coin’s overall appearance to remember the 75th anniversary of the historic Royal Visit paid to Canada by Britain’s King George VI and his consort, Queen Elizabeth. It was in 1939 that His Majesty King George VI, as King of Canada, visited the largest Dominion, the first ever by a reigning Monarch to Canada since confederation in 1867.

After the King’s coronation in 1937, it was planned by the Palace that the King should see more of the territories which he was head of state and that a tour of Canada would be the best place to begin what was planned to be many more royal tours. On the 17th May, their Majesties landed in Quebec City and proceeded to the west of the country by rail, visiting each of the Canadian provinces on their way. As Newfoundland was still its own independent entity, the maritime territory was also included. For Canadians, the event was considered extraordinary as no reigning monarch had ever visited Canada. The King & Queen attracted enormous crowds and expressions of affection wherever they went.

During the visit, the King celebrated his official birthday with the Trooping of the colour ceremony being held on Parliament hill – the first time with the monarch present. During their stay in Canada, the King & Queen took the opportunity to visit the United States from the 7th to the 10th June – the first-ever for a reigning British monarch who traveled with Canada’s Prime Minister, Mackenzie King. Both George VI and Queen Elizabeth were met by President Roosevelt and the first Lady Eleanor. With a ticker-tape parade in New York City, the British heads of state were also very warmly welcomed, the visit considered on of the most successful ever undertaken by a reigning monarch. The visit concluded in Halifax where their Majesties departed on the 15th June and on that evening, the royal couple boarded the RMS Empress of Britain to return to the United Kingdom.

Sadly, just four months later, the UK found itself having declared war on Hitler’s Germany and the Nazi regime – a war which was to last the world another six years. The King and his Queen were credited with lifting the morale of their nation time after time, the Queen herself being described by Hitler as “the most dangerous woman in Europe” for her ceaseless ability to rally the troops and people to fight on in the face of greater odds. 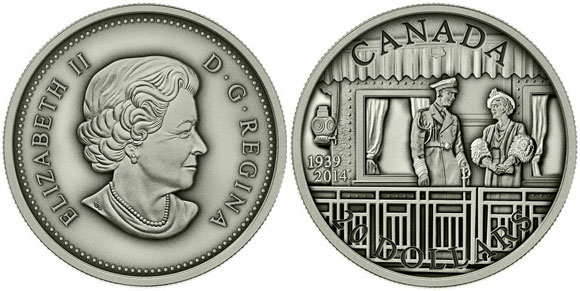 The coin’s reverse design features the King and Queen standing on the waving platform located at the back of the final car of the royal train. It served as the focal point of their arrival and departure from every stop along the tour and is the point where the couple would disembark and board the train. The King is in military dress and the Queen is elegantly dressed wearing white gloves, pearls and fur cuffs. Both are smiling and engaged in happy dialogue, evidently enjoying their latest visit as they travel across Canada.

The obverse includes the current portrait of HM Queen Elizabeth II as designed by Susanna Blunt and in use on Canadian coinage since 2003. In a departure from most Canadian silver coinage, the coin is produced with an oxidized process, resulting in an antique finish usually only seen on medals.

The coin is packaged in a presentation box along with serialized certificate and limited to just 5000 pieces. For more information or to place an order, please visit the Royal Canadian Mint product page. Information offered in English & French – international orders dispatched.