As I have mentioned before on my blog, I scan the local Craigslist web site for sellers of coins, and last week I had spotted this advertisement:

I responded, asking for more detail about the ‘over 50 silver coins’. He responded with this: 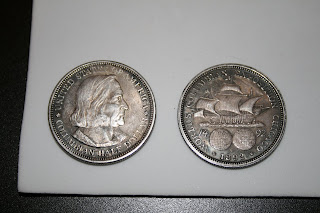 He asked me for a ball park figure, so I ran the numbers on the silver, using 16 times face value, and got $232. Without seeing the silver certificates, ‘older’ coins, nickels wheat cents, and foreign coins, it was difficult to calculate an accurate value, so I took a stab and offered $25 over his stated price of $250 in the hopes of landing the deal. He replied that my offer was the fairest offer he had received: most of the other potential buyers wanted to cherry pick the coins and leave him with the average items. We locked in at $275 and started making plans to complete the exchange.

On Monday, Columbus Day, I met with the seller, who had the coins in a canvas bag. I had neglected to bring anything to bring the coins home with me, so I offered him $5 more if I could have the bag as well, to which he agreed. After examining the certificates and coins, seeing that all was as he described in the email, I paid him $280. In the course of the conversation, I mentioned that despite focusing on U.S. coinage now, I have a considerable collection of foreign coins. On that, he presented another handful of foreign coins, including some silver, and offered them to me for $25. That was just outside what I could afford at that moment, so he dropped it to $20. When all was said and done, I had $14.50 in U.S. silver, two silver certificates, some older U.S. coins and three bags of Lincoln wheat cents, Buffalo nickels, and various foreign coins, and he had $300. 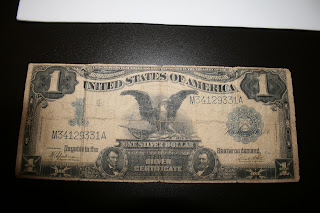 At my first opportunity, I started searching through the coins, trying to determine which I needed for my collection, which were in better condition than those I already had, and which were destined for a future resale. I found these coins to fill in or upgrade my collection: 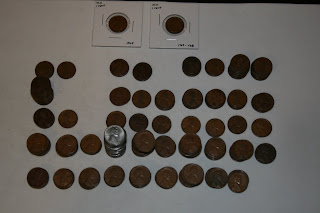 Next was the Lincoln wheat cents. When I bought them, I didn’t know what they would be, but thankfully the seller had provided a hand-written list of the contents. I was looking the list over when I saw this: 09-(2) Two 1909 cents? I immediately thought “What if one or both were the VDB variety?” and “I must find them now!” I pored over each coin, looking through over 100 of them for just those two, and in the end found one of each variety! I went on to sort them all so I could determine if I needed any others. I was very impressed that the bag represented 45 of the 50 years of production, and also included a good percentage of non-Philadelphia minted coins.

Once again, I find myself very happy with the purchase, and strongly recommend other collectors look at craigslist for reasonable deals, as well as some extraordinary ones.