The Royal Mint have issued a new and very limited coin which marks the 70th anniversary of both the liberation of the Channel Islands and Victory in Europe which much of the continent celebrated on the 7th May 1945.

The Channel Islands – consisting of the Bailiwick of Jersey and Bailiwick of Guernsey (of which Alderney is a part of) were the only part of the United Kingdom or the British Isles to have been occupied during the Second World War. They were amongst the most heavily fortified parts of the Atlantic Wall (a system of coastal fortifications built by Nazi Germany between 1942 and 1945) particularly Alderney which is the closest to France. Alderney’s Railway was also taken over by the Germans who lifted part of the standard gauge line and replaced it with a meter gauge line, The German railway infrastructure was dismantled after the liberation in 1945. So important was the retention of the Channel Islands to Hitler that on the 20th October 1941 he signed a directive, against the advice of Commander-in-Chief von Witzleben, (later implicated in the plot to assassinate Hitler in 1944)  to turn the Channel Islands into an “impregnable fortress”. Alderney was also the site of four concentration camps which the Nazis built, subcamps of the Neuengamme camp outside Hamburg. They were named after the Frisian Islands, Lager Norderney, Lager Borkum, Lager Sylt and Lager Helgoland and eventually closed in 1944.

Much of Europe had been plunged into darkness as conflict raged across the continent over land, sea and air, touching the lives of billions of people across the globe, becoming a ‘world’ war in the true sense of the word. The six-year wartime struggle had finally come to an end when at 7.40pm on Monday the 7th of May, 1945, the Ministry of Information in London issued a short statement confirming that war in Europe was over “In accordance with arrangements between the three great powers, tomorrow, Tuesday, will be treated as Victory in Europe Day and regarded as a holiday.” Tens of thousands of people flooded the streets of London to celebrate in an outpouring of relief and joy, congregating in Trafalgar Square, Piccadilly Circus and filling The Mall. The following day, Tuesday 8 May, ‘Victory in Europe’ day saw the festivities continue. Street parties were organized across the country, with people sharing food in the austere spirit of the times.

On the 8th of May 1945 at 10:00 am, the islanders were informed by the occupation authorities that the war was over. Winston Churchill broadcast on radio at 3:00 pm the same day which he announced, “Hostilities will end officially at one minute after midnight tonight, but in the interests of saving lives the “Cease fire” began yesterday to be sounded all along the front, and our dear Channel Islands are also to be freed today.”

Each year, VE Day is marked as a reminder of the relief felt by so many as war in Europe came to a close, and as a pledge to educate the generations that follow, in the hope that a repeat of the atrocities of the Second World War will be prevented. 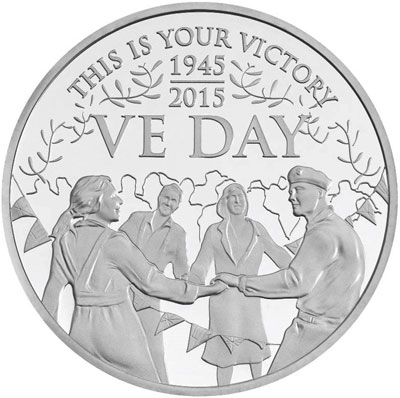 The coin’s reverse, designed by senior Royal Mint Engraver Lee R Jones, depicts what was a typical scene of revelers dancing in the streets when they learned that the hostilities in Europe were at an end. The design includes civilians and a soldier all holding hands and dancing in a circle. 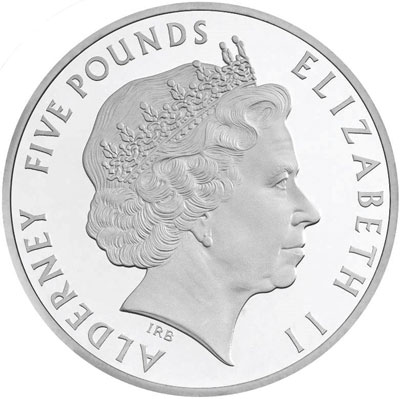 The coin’s edge includes the inscription ‘THIS IS YOUR VICTORY’ spoken by Sir Winston Churchill during his address to the Channel Islanders on their day of liberation. The very limited edition platinum coin is struck with double thickness or as a piedfort and has a mintage of only 70 pieces, one for each year of the event’s platinum anniversary.