The Royal Mint have launched their latest crown coin which marks the auspicious anniversary of the coronation of Queen Elizabeth II, which took place on the 2nd June 1953, sixteen months after her accession to the British throne.

Following the untimely death of King George VI after a reign of only just over 15 years, Elizabeth Alexandra Mary, Princess of the United Kingdom of Great Britain & Northern Ireland, heiress presumptive and eldest daughter of the late King, became Queen at the age of 25. Queen Elizabeth II also became head of the Commonwealth as well as head of state for more than a dozen other countries and territories. Since her accession, the Queen has celebrated her silver jubilee in 1977, a Golden jubilee in 2002 and an unprecedented Diamond jubilee in 2012. To date, the Queen is the second-longest reigning British monarch, only Queen Victoria (1819 – 1901) the Queen’s great-great grandmother has reigned longer with a tenure of 63 years.

Celebrations in the United Kingdom and all over the commonwealth were held in the Queen’s honor for her 60th year of reign and will continue for the anniversary of the magnificent coronation which took place at Westminster Abbey on the 2nd June 1953 which saw numerous heads of state in attendance and hundreds of thousands of well-wishers lining the streets of the procession during the rainy day to see the new Queen and her Prince Consort heading to and from the historic Cathedral. For the first time in history, the solemn event was televised to millions of homes around the world and ushering in the age of modern communications which the Queen’s reign has been a part of since that day. The Queen’s new coins which included her portrait also made their debut in the same year with a five shilling crown depicting the new monarch on horseback which was also struck for the occasion. 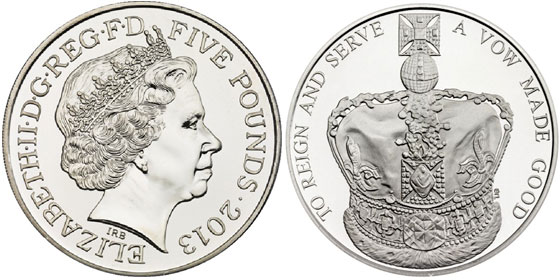 The new coin, designed by Royal Mint engraver Emma Noble includes a detailed rendition of the Imperial State crown, though the Crown of St. Edward’s is used for the actual coronation ceremony. The Imperial State Crown was used for official portraits of the Queen just after the ceremony. Created in the 15th century, the crown has evolved over the years and currently includes several famous jewels. The cross at the top is set with a stone known as St. Edward’s Sapphire, a sapphire taken from the ring of Edward the Confessor. The Black Prince’s Ruby which is actually a spinel is set on the front cross pattée and the famous Cullinan II, or Lesser Star of Africa, is set on the front. The crown also contains Queen Elizabeth I’s Pearls. The Crown is 31.5 centimeters (12.4 inches) tall and weighs 910 grams (2.0 lb) When not in use, it is kept with the other Crown Jewels on display in the Tower of London.

The obverse of the new “2013” dated crown includes the current circulation type portrait of the Queen designed by Iain Rank-Broadley and in use on all circulation & most commemorative coins since 1998.

The coin which has a face value of £5 will also be available in Platinum piedfort, Gold, silver-plated gold, silver, silver piedfort variations which will be made available in February of 2013. The cupro-nickel version is currently available and is minted in selected Brilliant uncirculated quality with a weight of 28 grams and a diameter of 38.6 mm. This version is packaged in a colorful collector’s folder and will have an unlimited mintage.

For more information on this and other coins offered by the Royal Mint, please visit their website at: http://www.royalmint.com/ International orders fulfilled.