The Government & Treasury of Niue have launched a new coin which marks the centennial of what is considered one of the greatest modern wonders of the world – that of the Panama Canal. When it became functional, the Panama Canal shortcut greatly reduced the time for ships to travel between the Atlantic and Pacific Oceans, enabling them to avoid the lengthy and hazardous Cape Horn route around the southernmost tip of South America via the Drake Passage or Strait of Magellan. Officially opened on August 15, 1914, it was one of the largest and most difficult engineering projects ever undertaken by man. During its first year of operations, about 1,000 ships passed through the canal in 1914, compared to 14,702 vessels just seven years ago. The journey from start to finish takes between 20 and 30 hours to traverse the three locks of the canal.

The earliest mention of a canal across the Isthmus of Panama dates back to 1534, when Charles V, Holy Roman Emperor and King of Spain, ordered a survey for a route through the Americas that would ease the voyage for ships traveling between Spain and Peru, then the kingdom’s richest colony and possession. During an expedition from 1788 to 1793, Alessandro Malaspina, an Italian nobleman who spent most of his life as a Spanish naval officer and explorer outlined plans for its construction. A route between the oceans was seen as an ideal and practical solution for trans-oceanic trade and in 1855 William Kennish, a Manx-born engineer working for the United States government, surveyed the isthmus and issued a report on a route for a proposed Panama Canal.

The first attempt to construct a canal through what was then Colombia’s province of Panama began on 1 January 1881 under the leadership of the builder of the Suez Canal in Egypt and with substantial funding and finance from France. Due to the inhospitable environs of the tropics and insufficient geological surveys of the water-soaked land not to mention the unusually high level of the loss of life by laborers, by 1889 the company set up to construct the canal went bankrupt and work was suspended on the 15th May of the same year. At this time, the President and the Senate of the United States were very interested in establishing a canal across the Central American isthmus, some favoring a route across Nicaragua with others advocating the purchase of the French interests in Panama. In June 1902, the U.S. Senate voted in favor of pursuing the Panamanian option, provided the necessary rights could be obtained. With Panama’s eventual declaration of independence from Colombia on the 3rd November 1903 which the US quickly recognized, allowing a treaty to be agreed to, granting rights to the United States to build and indefinitely administer the Panama Canal Zone and its defenses. President Theodore Roosevelt appointed John Findlay Wallace, formerly chief engineer and finally general manager of the Illinois Central Railroad, as chief engineer of the Panama Canal Project in May 1904. The building of the canal was completed in 1914, 401 years after Panama was first crossed by Vasco Núñez de Balboa. The United States spent almost $375,000,000 – the equivalent to more than 8 Billion dollars today to finish the project. This was by far the largest American engineering project of that or any previous era. The canal was formally opened on August 15, 1914, with the passage of the cargo ship SS Ancon. In 1977, a new treaty between the US and Panama provided for handover to Panama. After a period of joint American–Panamanian control, the canal was wholly taken over by the Panamanian government in 1999, and is now managed and operated by the Panama Canal Authority, a Panamanian government agency. 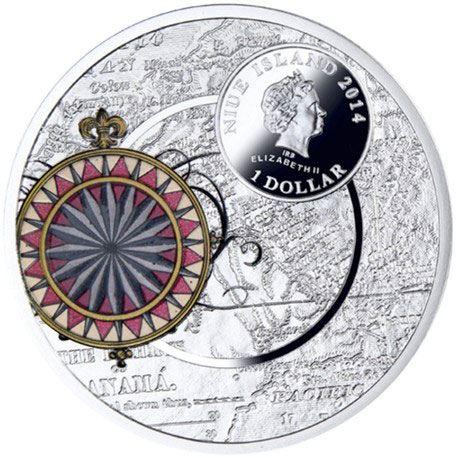 The coin, produced by the Mint of Poland on behalf of the Government & treasury of Niue, includes a a latent image on the reverse and a digital application of a full color image incorporated on the obverse. 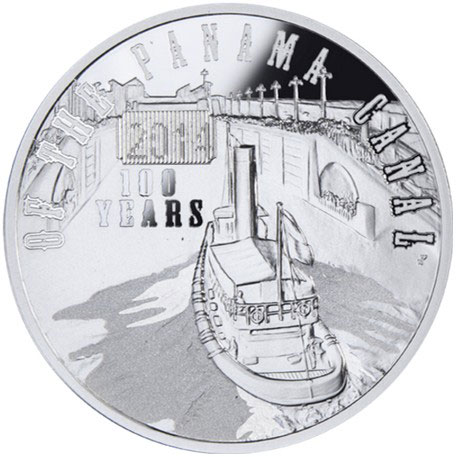 The reverse depicts a historic moment of the first vessel traversing the Panama Canal. Above the vessel and along the rim is the text “100 YEARS OF THE PANAMA CANAL”. The obverse shows an image of a wind rose against a map illustrating the Panama Canal. In the upper left corner is the image of a smaller coin which includes an image of Her Majesty Queen Elizabeth II. Around that coin is the inscriptions “NIUE ISLAND” along with “1 DOLLAR” and “ELIZABETH II” the year of issue “2014” and the mint mark of m/w.

The coin is packaged in a custom designed presentation box, in a circular shape and produced in polished wood. For more information on this and other coins offered by the Government of Niue, please visit the website of the Mint of Poland at: http://www.mennica.com.pl/en/products-and-services/mint-products/coins-of-other-issuers/product/zobacz/100th-anniversary-of-the-panama-canal-1-dollar.html Information offered in English and Polish. Interested collectors are invited to contact the sales office of the Mint of Poland at: for further information on the easiest way to order or to find an authorized distributor in or close to your country of residence.