The National Bank of Slovakia has issued (11th January) a new coin, the first for 2013, which marks one of their very own anniversaries, that of their 20th anniversary of their establishment in 1993. The Národná banka Slovenska as it is known in the Slovak language, was established as the central bank of the Slovak Republic on the 1st January 1993 after the Czech and Slovak Federation was split into two separate countries.

In the 20 years of its existence, the bank has played a key role in all major monetary and economic events in Slovakia and has helped form and stabilize the country’s current place in the European Union and EURO-zone home. The first new Korona banknotes and coins were placed into circulation on the 8th February 1993 and remained in circulation until the 1st January 2009 when Slovakia became the 16th country in the European Union to transition to the EURO single currency. Today, the Bank is a part of the European System of Central Bank and is a member of Eurosystem. The National Bank represents Slovakia in international financial institutions and in international money market transactions related to monetary policy performance. 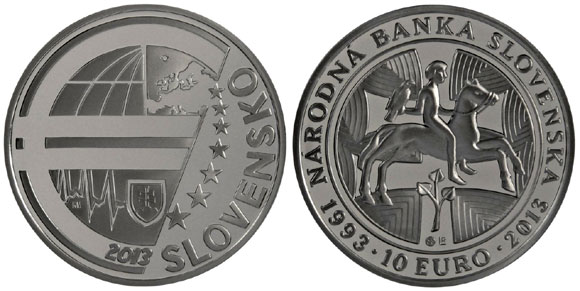 The 2013 National Bank of Slovakia 20th Anniversary 10 Euro Silver Coin, struck by the Kremnica Mint, is designed by Ph. Dr. Kliment Mitura, (obverse) and depicts a stylized euro symbol, with the upper part of the design featuring sections of a globe and a map of Europe (representing the Národná banka Slovenska’s membership of the Eurosystem) and the lower part depicting a chart. On the right-hand side are seven stars and on the left-hand side is the national emblem of the Slovak Republic. The country’s name “SLOVENSKO” is seen next to the right edge of the design and to the left of the name is the year “2013”. Below the chart are the stylized initials of the designer.

The reverse side, designed by Mgr. Art. Roman Lugár  depicts the NBS logo together with a traditional double cross, all set against a decorative background. In the upper part of the coin is the inscription “NÁRODNÁ BANKA SLOVENSKA” and along the lower edge is the denomination “10 EURO”. The years “1993” and “2013” appear on either side of the denomination. The mintmark of the Kremnica Mint, “MK”, is set just under the primary design, while the stylized initials of the reverse side’s designer is placed next to the mintmark.

Struck in .900 silver, the coin weighs 18 grams with a diameter of 34 mm. Produced in both Proof and BU quality, the proof edition has an authorized mintage of 9,150 with the BU example being set at 4,100 examples. For more information on this and other coins offered by the Kremnica Mint, please visit the website of the Kremnica Mint at: http://www.mint.sk/aktuality.php#a1 Information offered in English – international orders fulfilled.