The Perth Mint of Australia has released gold and silver coins to commemorate the 175th anniversary of the coronation of Queen Victoria. She ascended the throne in 1838 at the age of eighteen and reigned until her death on January 22, 1901. 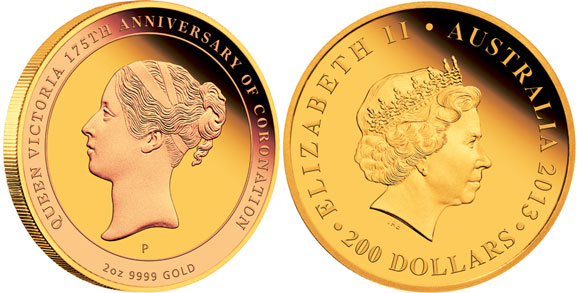 The 2 oz proof gold coin features William Wyon’s original “Young Head” effigy of Queen Victoria. The inscriptions include “Queen Victoria 175th Anniversary of Coronation” with the metal weight and fineness “2 oz 9999 Gold”. The Perth Mint’s “P” mint mark appears at the base. The obverse contains the Ian Rank Broadley effigy of Queen Elizabeth II with the legal tender denomination of “200 Dollars” and the date “2013”. 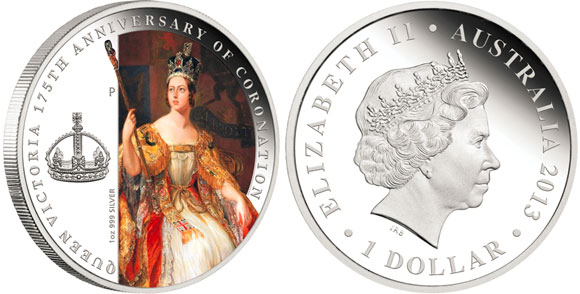 The 1 oz proof silver coin includes a colored Coronation image from the Royal Collection painting of 1840 by Sir George Hayter. Queen Victoria’s Diamond Crown appears to the left. Inscriptions read “Queen Victoria 175th Anniversary of Coronation” and “1 oz 999 Silver”, with the “P” mint mark. The obverse contains the Ian Rank Broadley effigy of Queen Elizabeth II with the legal tender value of “1 Dollar” and the date “2013”.

Each of the coins come housed in a display case with illustrated shipper and numbered certificate of authenticity.

For information or to place an order for these and other recently released coins, visit the recent releases section of the Perth Mint website.