Shortly following the assassination of President John F. Kennedy on November 22, 1963, legislation was introduced and passed which authorized Kennedy to appear on the half dollar. The obverse for the new coin would be designed by Chief Engraver Gilroy Roberts based on the existing bust of Kennedy he had prepared for a presidential medal. The reverse would be designed by Frank Gasparro based on the Presidential Seal. Production for circulation would begin on February 11, 1964, with the coins first made available to the public on March 24, 1964.

Initial demand was substantial and the coins were hoarded by members of the public who were eager to obtain a memento of the fallen President. By the end of the year more than 400 million pieces had been struck at the Philadelphia and Denver Mint facilities. In part due to the tendency of the public to hoard the coins, the use of the half dollar denomination within commerce declined in the ensuing years. Eventually, production for circulation would cease after 2001, although the coins continued to be struck to satisfy demand from collectors. 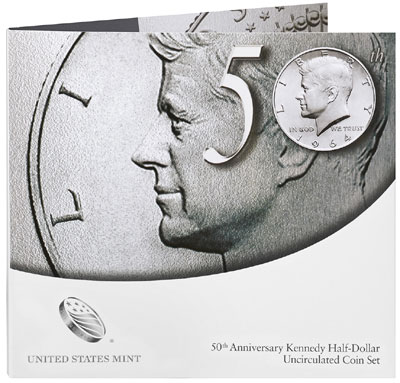 The 50th Anniversary Kennedy Half Dollar Uncirculated Coin Set includes one coin each from the Philadelphia and Denver Mint facilities. These coins are struck in the standard composition of 91.67% copper and 8.33% nickel with an uncirculated finish. Each of the coins carries the original 1964 Kennedy Half Dollar portrait design with an inscription of the 2014 date.

Earlier in the year, the United States Mint released 2014 Kennedy Half Dollars carrying the standard modern portrait. These coins were included within numismatic bags and rolls, as well as certain annual sets. The two coins included in the 50th Anniversary Set represent distinct and separate issues from the coins released previously.

Packaging for the special set consists of an outer folder and coin card. The folder features enlarged partial images of the 1964 Kennedy Half Dollar along with smaller coin images incorporated into the numeral “50” to denote the anniversary. Information on the 50th anniversary of the coin design is also included.

The coin card contains the two coins of the set, which are encapsulated with the obverse and reverse designs visible. The back of the card contains design information, coin specifications, and a certificate of authenticity.

Each set is priced at $9.95 and an ordering limit of five sets per household has been established. The US Mint will evaluate this ordering limit throughout the period of availability and may make adjustments.

There are two additional numismatic products planned for this year to celebrate the 50th anniversary of the Kennedy Half Dollar. A 3/4 oz 24 karat gold proof coin bearing the dual date of “1964-2014” will be available for purchase on August 5, 2014. A four coin set containing 90% silver coins from different mint facilities and carrying different finishes will be available for purchase in the fall.