The Royal Canadian Mint have announced a special commemorative reverse design in celebration of the iconic “Maple Leaf” silver bullion coin, first issued in 1988. Following in the footsteps of the even more successful Gold Maple Leaf bullion series originally issued in 1982, the RCM entered the silver market in 1988 and issued a pure silver coin with a face value of $5. The coin, like its gold counterpart, included the same admired design which was launched on the gold series – that of the single intricately etched maple leaf, the recognized symbol of the largest country in North America. Prized, since its introduction for its purity and liquidity as a frequently traded bullion coin, this new, special-edition Silver Maple Leaf is an unforgettable keepsake which also meets the exacting needs of experienced and new precious metal investors alike. 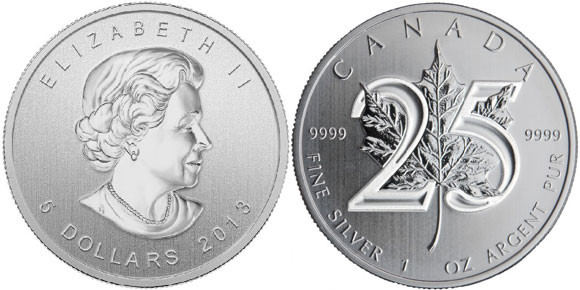 The Mint’s Ottawa facility is producing a mintage of one million pieces carrying the 25th anniversary commemorative design of the Silver Maple Leaf bullion coins. Composed of one troy ounce of 99.99% pure silver, the reverse of this new coin features the Walter Ott maple leaf design that has become the signature of the Mint’s “Maple Leaf” family of bullion coins, over which the numerals “25” have been delicately interlaced.

The obverse features the effigy of Her Majesty Queen Elizabeth II, created in 2003 by Canadian portrait artist Susanna Blunt. Since the coin’s initial introduction, the Blunt portrait is the third such depiction of HM Queen Elizabeth II to appear on the Maple leaf series.

In keeping with the distribution policy of the Royal Canadian Mint regarding bullion-related coins, the Mint reminds its customers that it does not sell bullion directly to the public. Interested buyers are encouraged to contact a reputable bullion dealer to order this special limited edition 25th anniversary Silver Maple Leaf bullion coin, which will be available as of early December 2013.