The Royal Canadian Mint have launched their newest coin, which pays tribute to the Coast Guard on the 50th anniversary of its formation. The commemorative coin honors all former and current members of the Canadian Coast Guard for their commitment to keeping Canadian waterways safe, often while risking their own lives to do so.

Canada, the world’s second largest country in land mass – has the world’s largest coast line at more than 125,570 miles or 202,080-kilometres. The Canadian Coast Guard was founded on the 26th January 1962 and is a special operating agency within the department of Fisheries and oceans. Today’s Coast Guard employs more than 4,500 personnel with 114 vessels and 22 helicopters under its command. 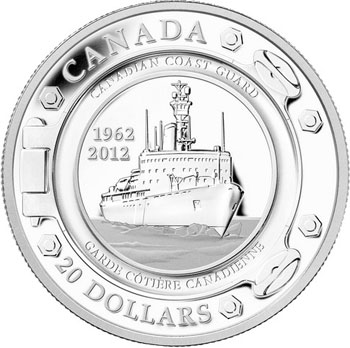 The reverse design of this exceptional coin utilities elements of the flagship icebreaker CCGS Louis S. St-Laurent, hard at work in the frozen waters of the Canadian Arctic. The view of the ship is seen through a porthole window complete with engraved hinge, rivets and two locks. The porthole frame is embossed with the words “CANADIAN COAST GUARD/GARDE CÔTIÈRE CANADIENNE. The commemorative years “1962 2012” are seen just to the left of the vessel and the coin’s denomination of twenty dollars is just under the porthole frame. The reverse design is the work of artist Yves Bérubé.

The obverse of the coin includes the present circulation portrait of HM Queen Elizabeth II designed by Susanna Blunt and used on all Canadian coinage since 2003.

Struck in pure .999 silver to proof quality, the coin has a weight of 31.3 grams and a diameter of 38 mm. Presented in a Canadian Maplewood box, each coin is accompanied by a vial containing a small piece of steel from the pre-refit bow of CCGS Louis S. St-Laurent taken during its refitting. A mintage of 7,500 coins has been authorized.

For more information on this and other coins offered by the Royal Canadian Mint, please visit their website at: http://www.mint.ca/store/coin/20-fine-silver-coin-50th-anniversary-of-the-canadian-coast-guard-mintage-7500-2012-prod1410002