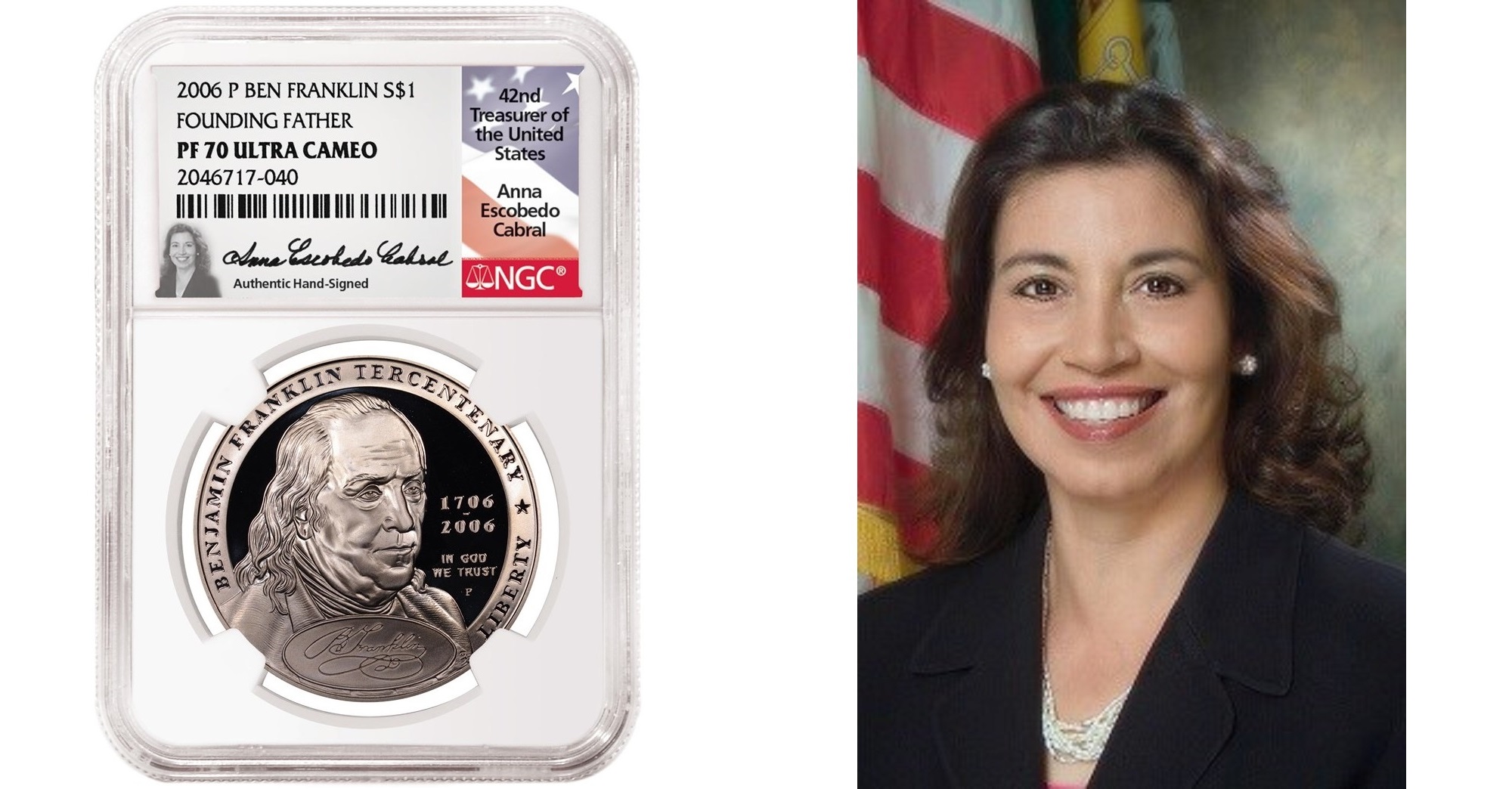 Left: A coin with the NGC Authentic Hand-Signed Anna Escobedo Cabral Signature Label. Right: Cabral was Treasurer of the United States from 2005 to 2009. Hover to zoom.

The Numismatic Guaranty Corporation (NGC) is excited to announce that Anna Escobedo Cabral, the 42nd Treasurer of the United States, will individually hand-sign its certification labels.

As Treasurer of the United States, Cabral worked closely with the directors of the U.S. Mint during a dynamic time in its history, when some of its most successful and innovative coins were released. Among the initiatives undertaken by the Mint during her tenure were:

The pairing of a coin from Cabral’s time as Treasurer and an NGC label with her authentic autograph creates a unique collectible with a personal connection to someone closely connected with the coin.

Cabral also coordinated on currency design issues with the Bureau of Engraving and Printing, which prints U.S. paper money. Her signature, along with the Treasury Secretary’s, appeared on Federal Reserve Notes issued during her tenure. All series 2003A, 2004A, 2006, and 2006A notes bear her signature.

This gives collectors a number of options for pairing a collectible coin (such as the 2006-P Ben Franklin Founding Father commemorative Proof silver dollar) with a modern banknote (such as the 2006 series $100 Federal Reserve Note, which also features Franklin’s portrait).


Cabral was appointed by President George W. Bush and confirmed by the U.S. Senate on November 20, 2004. She was sworn in on January 19, 2005, and held the post for the duration of Bush’s second term.

Rising from an underprivileged childhood in California, Cabral went on to earn a master’s degree from Harvard University and served as deputy staff director of the U.S. Senate Judiciary Committee in the 1990s. She served as director of the Smithsonian Institution’s Center for Latino Initiatives, before joining a series of 16 women who have held the office of Treasurer since 1949.

Anna Escobedo Cabral Authentic Hand-Signed NGC Signature Labels will be available from select retailers soon. Interested in bulk submissions? Contact Miles Standish at  or 1-949-922-0515, or Scott Heller at  or 941-360-3990.