Today, officials from the United States Mint and National Park Service held a special ceremony to mark the release of the Andrew Johnson Presidential Dollar. This coin is the 17th release in the ongoing series of circulating $1 coins issued to honor the former Presidents of the United States. 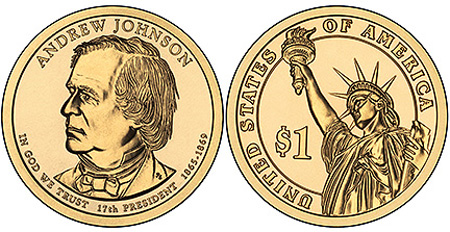 The ceremony was held at the Andrew Johnson National Historic Site in Greeneville, Tennessee. The United States Mint’s Chief Counsel Daniel P. Shaver, and Daniel Luther and Lizzie Watts from the Andrew Johnson National Historic Site were present to commemorate the coin’s release. The ceremony was open the public. Children in attendance received a free coin, while others had the opportunity to exchange currency for 25-coin rolls of the new coin at face value.

The obverse of the $1 coin features a portrait of Andrew Johnson while the reverse includes a depiction of the Statue of Liberty. Both were designed and sculpted by Don Everhart.

To comply with the legislative requirements of the series, the Federal Reserve Banks provide financial institutions with periods during which unmixed quantities of each newly release Presidential Dollar may be ordered. The special ordering period for the Andrew Johnson Presidential $1 Coin runs from January 27 to March 3, 2011.

The United States Mint will offer collectible rolls of the Andrew Johnson Presidential Dollar next week on February 23, 2011. Each roll contains 25 circulating quality coins in a special wrapper.