Andrew Johnson was the 17th President of the United States of America. After the secession of the Confederate States, he was the only Southern senator not to quit his post. He, along with Abraham Lincoln, ran under the National Union Party in the election of 1864. His first order of business upon ascending to the Presidency was to manage the return of the seceded states back into the country, but had to contend with an impeachment battle, the first for a sitting President. He is commonly ranked by historians in the bottom tier of U.S. Presidents. 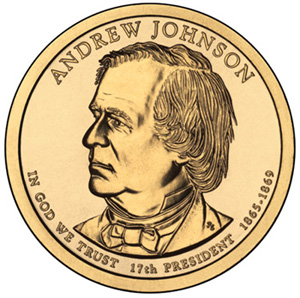 The coin bearing President Johnson’s image is the 17th in the series of Presidential Dollar coins, and the first to be issued in 2011. Its obverse depicts Johnson, with inscriptions indicating his years in office (1865-1869), order of the Presidency, and the motto “In God We Trust”. The reverse shows the Statue of Liberty in the same design as been depicted on all Presidential Dollars. The edge has the motto “E PLURIBUS UNUM”, the year of issuance, and the mint mark.

The Andrew Johnson Presidential Dollar will be released into circulation on February 17, 2011. The coin will also be available from the U.S. Mint in the following numismatic products:

An official launch ceremony for the Andrew Johnson Presidential Dollar will be held on February 17, 2011, 11:30 AM at the Andrew Johnson National Historic Site in Greeneville, Tennessee. Following the ceremony, attendees may exchange currency for 25-coin rolls of the new coins at face value.