The Ministry of Finance of the government of Andorra have launched (12th March) commemorative gold and silver coins since joining the euro currency in 2014. The coins are also the principality’s first-ever commemorative coins in a legal tender currency. The coins are minted in celebration of the 25th anniversary of the Andorran constitution, which was adopted by the Andorran Assembly on the 2nd February 1993, and given assent by the Andorran people in a referendum on the 14th March 1993. Uniquely, Andorra is the world’s only remaining co-principality which gives the country the singular distinction of being reigned over by two equal, sovereign princes.

The new constitution confirmed Andorra’s designation as a principality and upheld the principle that there are two officials who are Andorra’s heads of state, the bishop of Urgell and the president of France. This arrangement has existed for centuries, although at one time, the position was previously held by the king – or emperor — of France prior to the abolition of the French crown or empire in 1870. The constitution was signed by Andorra’s then co-princes, the president of France, François Mitterrand, and Joan Martí Alanis, the bishop of Urgell.

The current constitution is made up of 107 articles and includes a preamble — a definition of Andorran sovereignty — which outlines and guarantees the rights and freedoms of the Andorran people and describes the duties of the Andorran co-princes. Due to the change in France and the abolition of the crown and empire, the president of France has the distinction of being the only monarch in the world to be elected by ordinary citizens, though not by the citizens of Andorra. The French president is also the world’s only individual to be a monarch and the head of a republic at the same time. Andorra’s other sovereign prince is appointed by the Pope, who himself is the head of the world’s smallest sovereign state — Vatican City. Since 1278, this second prince has always been the incumbent bishop of Urgell, who resides in the bishopric palace just across the Spanish border in La Seu d’Urgell.

The coins are struck in both gold and silver and share the same obverse and reverse designs. The obverse depicts the coat of arms of the principality, and the first words of the preamble of the constitution, as well the inclusion of an allegorical face, representing the Andorran people. Part of the depiction includes an oak branch, with reference to the constitution — symbolising stability — while an olive branch symbolises peace and a continuance to promote values such as freedom and coexistence. On the reverse, there are two hands shown which symbolise the two co-princes who were signatories of the constitution and is accompanied by the inscription Virtus Unita Fortior. Under the signatories is the denomination of the coin, 50 or 5 EURO, respectively 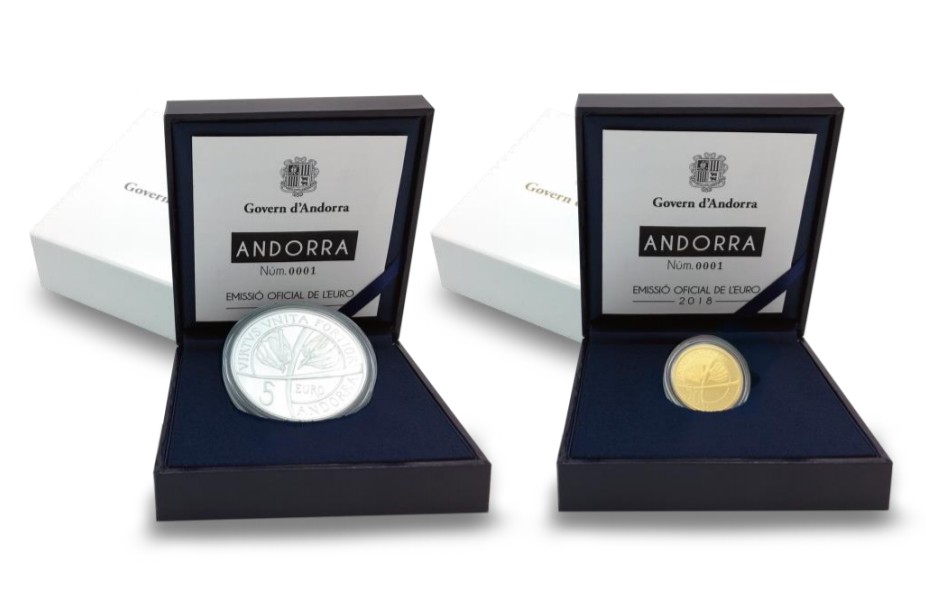 Each coin is encapsulated and presented in a custom case and is accompanied with a numbered certificate of authenticity. The gold and silver coins are sold as separate items. The Andorran Treasury has advised that sales of the new commemorative coins have commenced since the 13th March and will be sold exclusively through the numismatic and coin retail shops in Andorra. Interested collectors can also contact the treasury directly with any queries regarding purchase of either or both coin versions to: