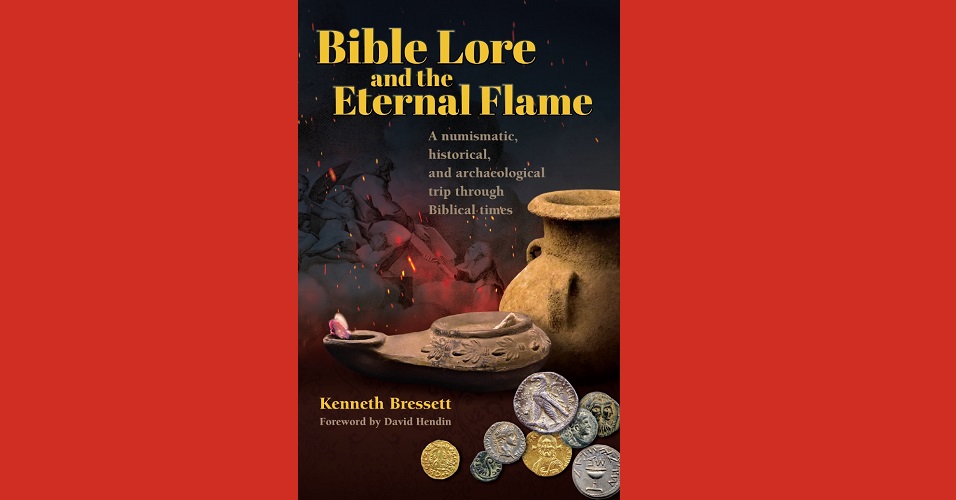 Bible Lore and the Eternal Flame, by Kenneth Bressett, debuts at the ANA National Money Show in Colorado Springs, March 2022. Hover to zoom.

Kenneth Bressett will autograph his new book Bible Lore and the Eternal Flame at the American Numismatic Association’s National Money Show in Colorado Springs, March 10, 2022. After that debut, the 224-page hardcover volume will be available from bookstores and hobby shops and online. Here, Whitman publisher Dennis Tucker discusses how the book came to be, its context among other numismatic publications, and how it was developed. 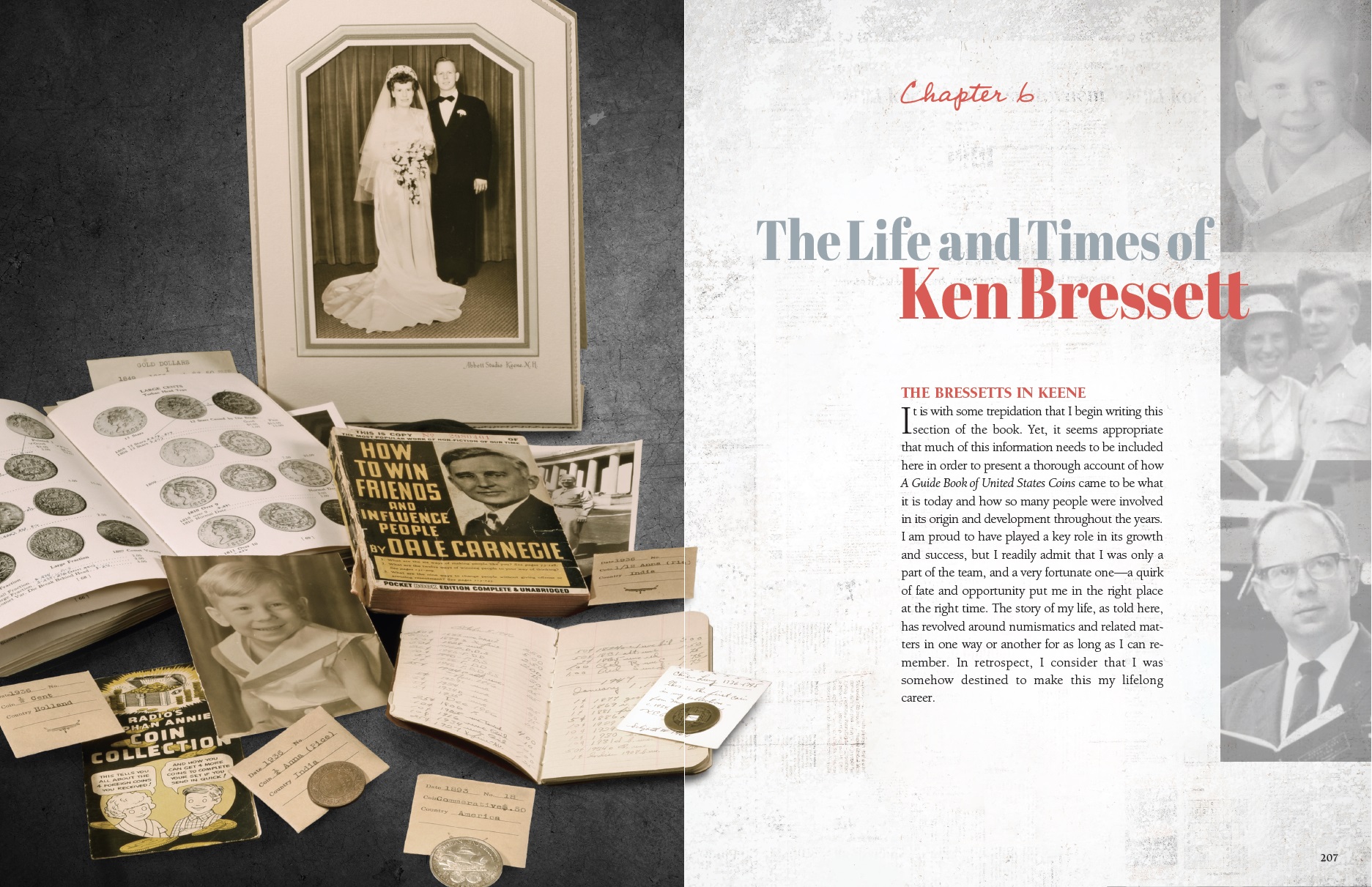 Ken Bressett is best known as an expert in American coinage, but his studies also cover world coins and ancient civilizations. (Pictured: The opening pages of chapter 6 of A Penny Saved, Bressett’s memoir about Whitman Publishing, the Red Book, and R.S. Yeoman.)

In February 2021, Kenneth Bressett’s latest manuscript, A Penny Saved: R.S. Yeoman and His Remarkable Red Book, was well into production. (The book would debut that August at the American Numismatic Association World’s Fair of Money.) In the midst of that ongoing work, I mailed Ken an article that had caught my eye in the current issue of Biblical Archaeology Review. It was about specific uses of ancient pottery in the Holy Land. Years earlier Ken had shown me some Greek and Roman amphorae and coins from his personal collection, and I knew he’d find the article interesting.

A few days later he replied. “This subject is especially timely because lately I’ve been thinking about writing a sequel to my book Money of the Bible, and have been doing some research on related topics. I would appreciate your thoughts on this, and if you think it is worth pursuing….”

As any publisher would be, I was delighted by this proposal. And having been Ken’s publisher for more than 15 years, I wasn’t at all surprised that he was thinking ahead to his next project—even before the ink was dry on his latest book!

The resulting work, Bible Lore and the Eternal Flame, is not Whitman Publishing’s first in the field of ancient coins. Recent publications include Coins of the Bible (Friedberg, 2004), a popular exploration of the subject. Money of the World: Coins That Made History (Goldberg and Goldberg, editors, 2007) included two chapters on ancient Greece and Rome by David L. Vagi. Harlan J. Berk’s 100 Greatest Ancient Coins (2008, with an expanded second edition in 2019) has introduced many collectors to the wonders of ancient numismatics. Paul D. Rynearson’s Collecting Ancient Greek Coins: A Guided Tour Featuring 25 Significant Types (2008) was at once an introduction to the subject and an action guide for assembling a personal collection of coins. David MacDonald’s scholarly but accessible Overstruck Greek Coins: Studies in Greek Chronology and Monetary Theory (2009) was the first book-length exploration of that subject. 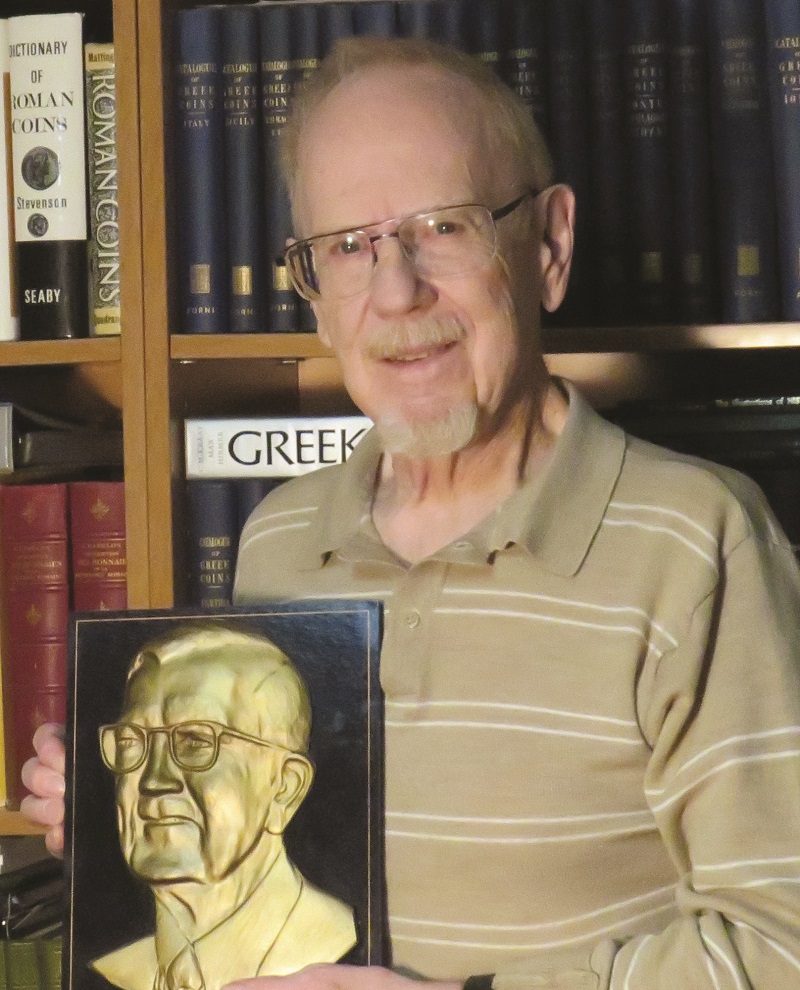 Bressett, seen here in the “ancient coins” section of his library, holds a portrait plaque of his Whitman Publishing predecessor, R.S. Yeoman.

Like Whitman, Ken Bressett is not a newcomer to the ancient world. Although he’s popularly known as the editor (and, now, editor emeritus) of the Guide Book of United States Coins and has been involved in many aspects of modern American coinage, Ken has a long-held passion for ancient coins. In addition to pursuing his own research, starting in the 1960s Ken encouraged Zander H. Klawans to contribute articles on ancient coins to the Whitman Numismatic Journal. In 1994 he crafted a new work from two of Klawans’s well-established books (Reading and Dating Roman Imperial Coins and An Outline of Ancient Greek Coins). He skillfully edited them into a single volume to aid both beginning and advanced students. The resulting Handbook of Ancient Greek and Roman Coins has since been a constant reference for collectors, with tens of thousands of copies in print.

More recently, Ken’s Money of the Bible, first published in 2005, has similarly proven to have evergreen appeal. It was updated in new editions in 2007 and 2013.

Another Bressett opus, Milestone Coins: A Pageant of the World’s Most Significant and Popular Money (2007), featured chapters on the ancient world and Biblical money.

“The association of coins with past events is widely known and appreciated by archeologists and historians, but it is often overlooked by Bible students,” Ken wrote in the introduction to Money of the Bible. As did that book, Bible Lore and the Eternal Flame seeks to investigate the money of the ancient world as a means of exploring the Old and New Testaments, and to bring students closer to understanding, and appreciating, the historical context of biblical stories. 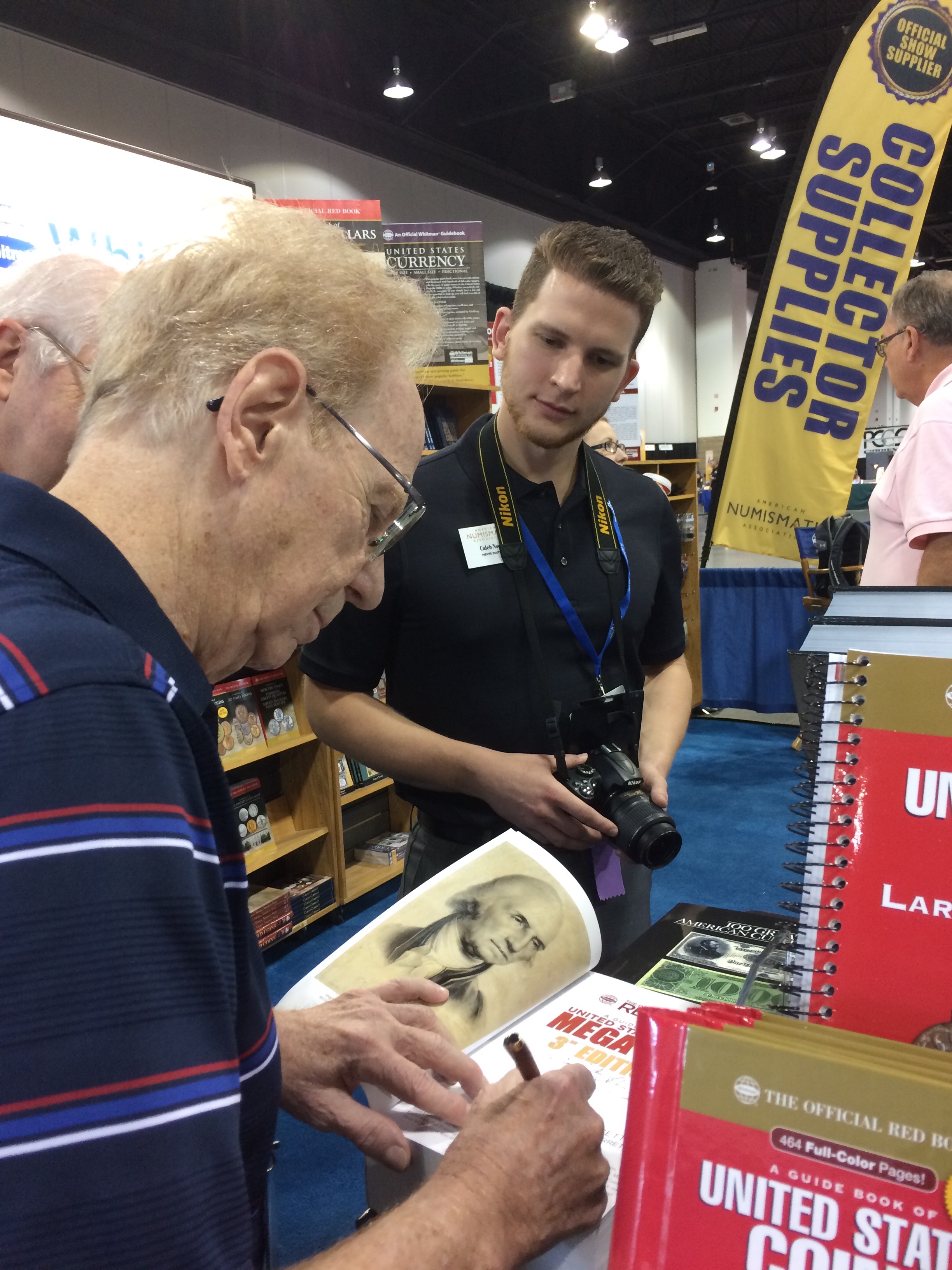 Ken Bressett will greet fans and autograph books at the ANA convention, March 2022. Pictured here in August 2017, he signs a copy of Mega Red for editor Caleb Noel of The Numismatist. In Bressett’s latest book, Bible Lore and the Eternal Flame, the author uses ancient coins and other material culture to explore the civilizations of Biblical times.

What the Book is Not

Bible Lore and the Eternal Flame is not a price guide, a market study, or a how-to handbook for collectors. What it offers students is that special magic of new light shone on enduring subjects; the clarity of obscure connections brought into sharp focus; and the pleasure of tales well told. These all are sparks that can lead to collecting. Or they may additionally inform and enrich the understanding of the historian, archaeologist, and student of theology or the ancient world.

Bressett was careful to research Bible Lore and the Eternal Flame from many disciplines and perspectives. He even sought the review of skeptics and non-believers, whose perceptions were given special consideration in parts of the manuscript. “I want to present a picture of how numismatics and archeology help in establishing a clearer image of ancient times,” he told me in one conversation about the book.

On the other side of the coin, it was important for Ken to seek the imprimatur of the Roman Catholic Church. After a careful review of the manuscript in accord with canon 827 of the Code of Canon Law, Nihil Obstat was issued and the Bishop of Colorado Springs granted the Church’s imprimatur.

Many of the coins pictured in Bible Lore and the Eternal Flame are from Ken Bressett’s personal collection. Reading his new book is nearly the equivalent of sitting down with one of the world’s best numismatic storytellers and doing something Ken himself is always up to: Learning, learning, learning, and enjoying every minute of it. 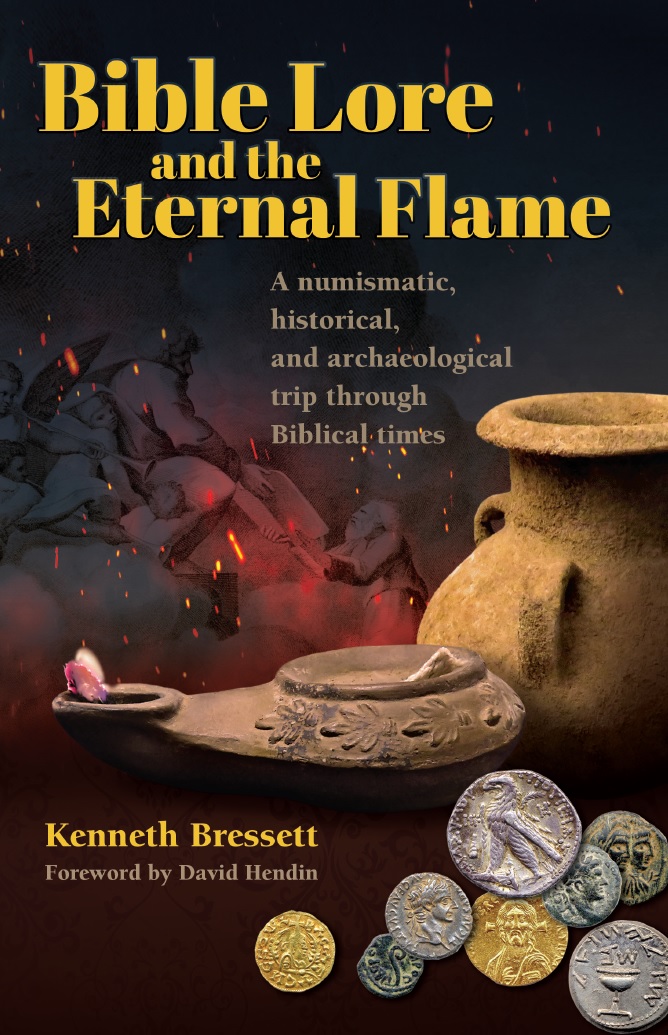 Bible Lore and the Eternal Flame

Whitman Publishing is the Official Supplier of the American Numismatic Association. As a benefit of membership in the ANA, members can borrow Bible Lore and the Eternal Flame (and other Whitman books) for free from the Association’s Dwight N. Manley Numismatic Library, and also receive 10% off all Whitman purchases. Details are at the website of the ANA.