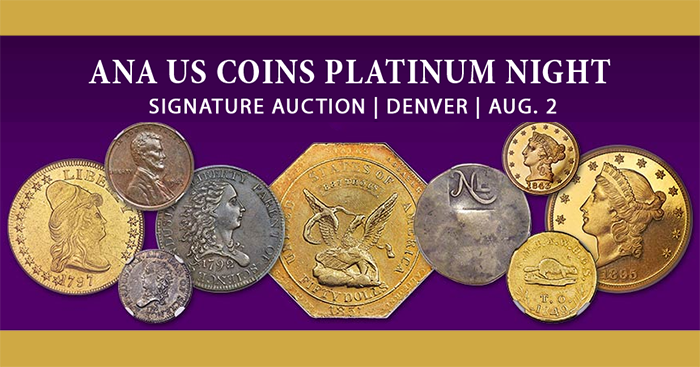 On August 2, in conjunction with the American Numismatic Association’s World’s Fair of Money (held this year in Denver, Colorado), Heritage Auctions will hold their Platinum Night auction of United States coinage. The auction consists of a total of 467 items ranging from colonial coinage to high-grade 20th-century coins. Platinum Night is usually the auction where the most special coins are offered, some of them having been off the market for many years. In this preview we will take a look at a small number of highlights from this session. All lots discussed in this article, as well as the other coins in this session and the other items crossing the auction block during this week, can be viewed at http://www.ha.com.

All images are high-resolution; hover over each to zoom in. 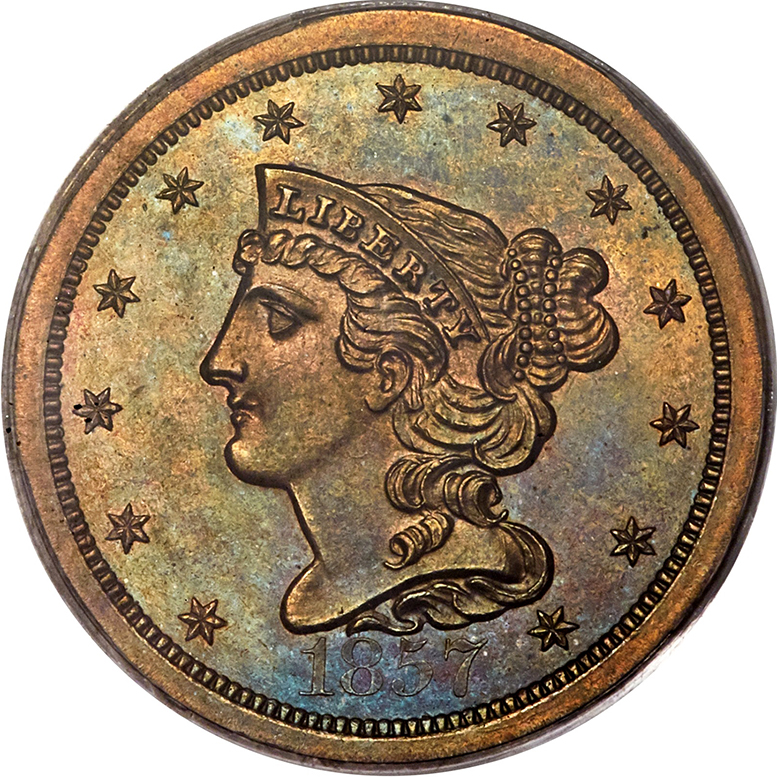 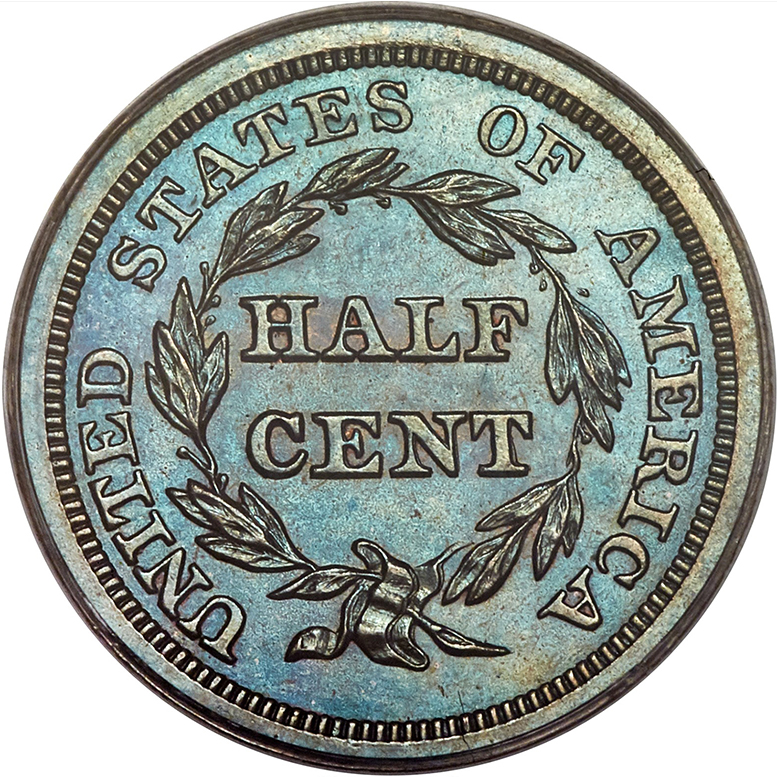 The first coin we will take a look at is the final date for the now long-forgotten half-cent series, struck in Proof format. Lot 3879 is a PCGS PF-66 RB Braided Hair half cent that also has been stickered by CAC. Any Proof coins of this denomination are extremely difficult to find, as production and sales of commercial Proof coins did not commence until 1858, by which time the denomination had already been discontinued. At a later point some restrikes were made, which contributed quite heavily to the existing population of Proof half cents. The particular coin offered by Heritage at the ANA utilized the same reverse die as used for many of these restrikes, but in a very early state, indicating that restrikes for this denomination were probably not struck until after the series had ended. A fascinating piece of numismatic history that also comes with an impressive pedigree dating back to the first decade of the 20th century. 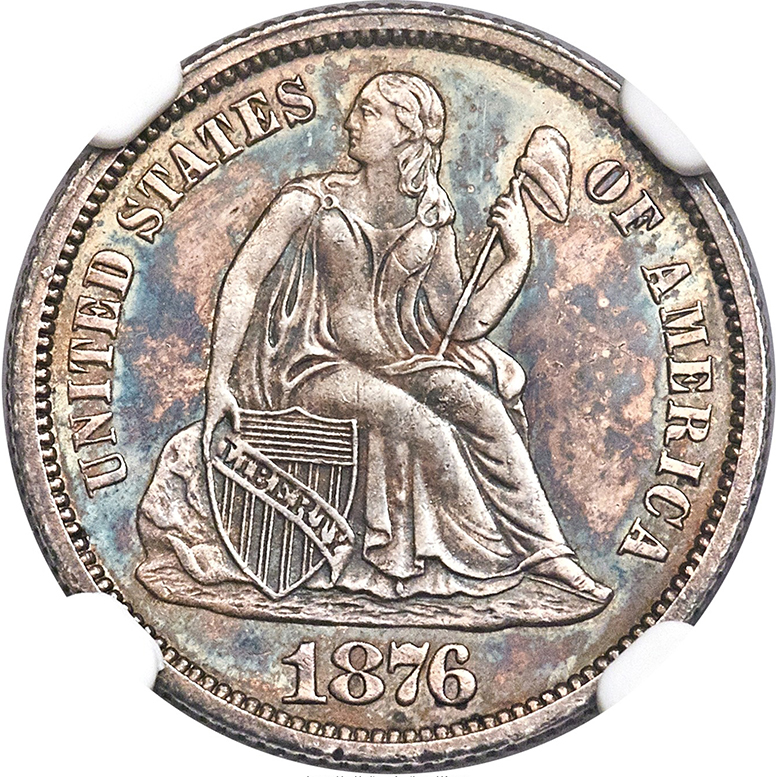 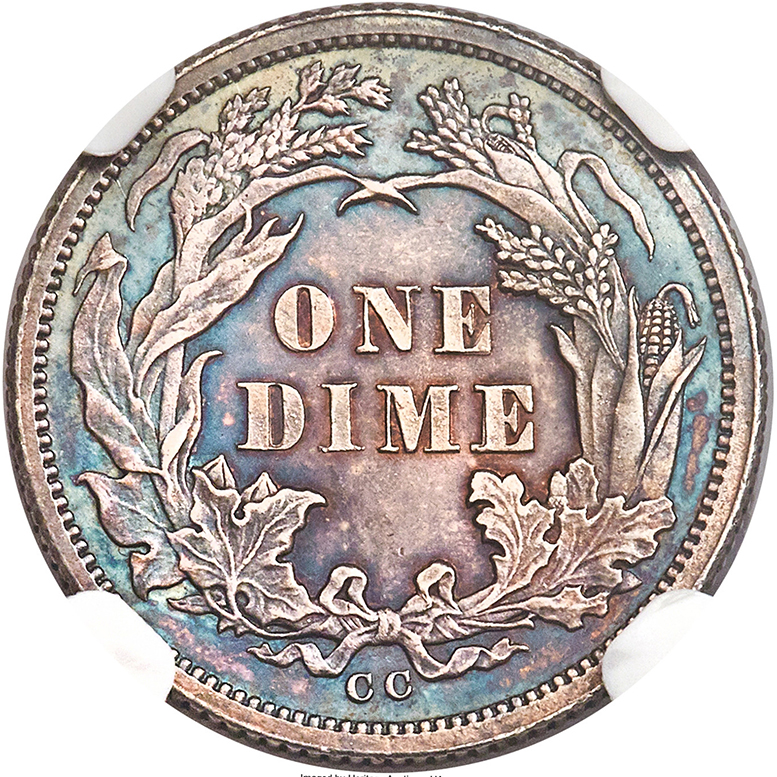 The next on our list of coins that are noteworthy or exceptionally rare certainly falls into the latter category. Lot 3930 is one of just three known specimen or Proof branch-mint examples known to exist of the 1876-CC Liberty Seated dime, graded SP-65 by NGC. The reason for the existence of this coin is not known, as the Carson City Mint is believed to have struck circulation coinage only during the Centennial year (Proof coins were generally only struck in Philadelphia)—but it is without doubt that this particular coin received extra care and attention when it was struck. Perhaps some Mint employees were playing around (not likely), or perhaps the coin was meant to celebrate America’s 100th anniversary (more likely), but in any event it is an extremely rare coin and in a very, very rare class of branch-mint specimen/Proof coinage. 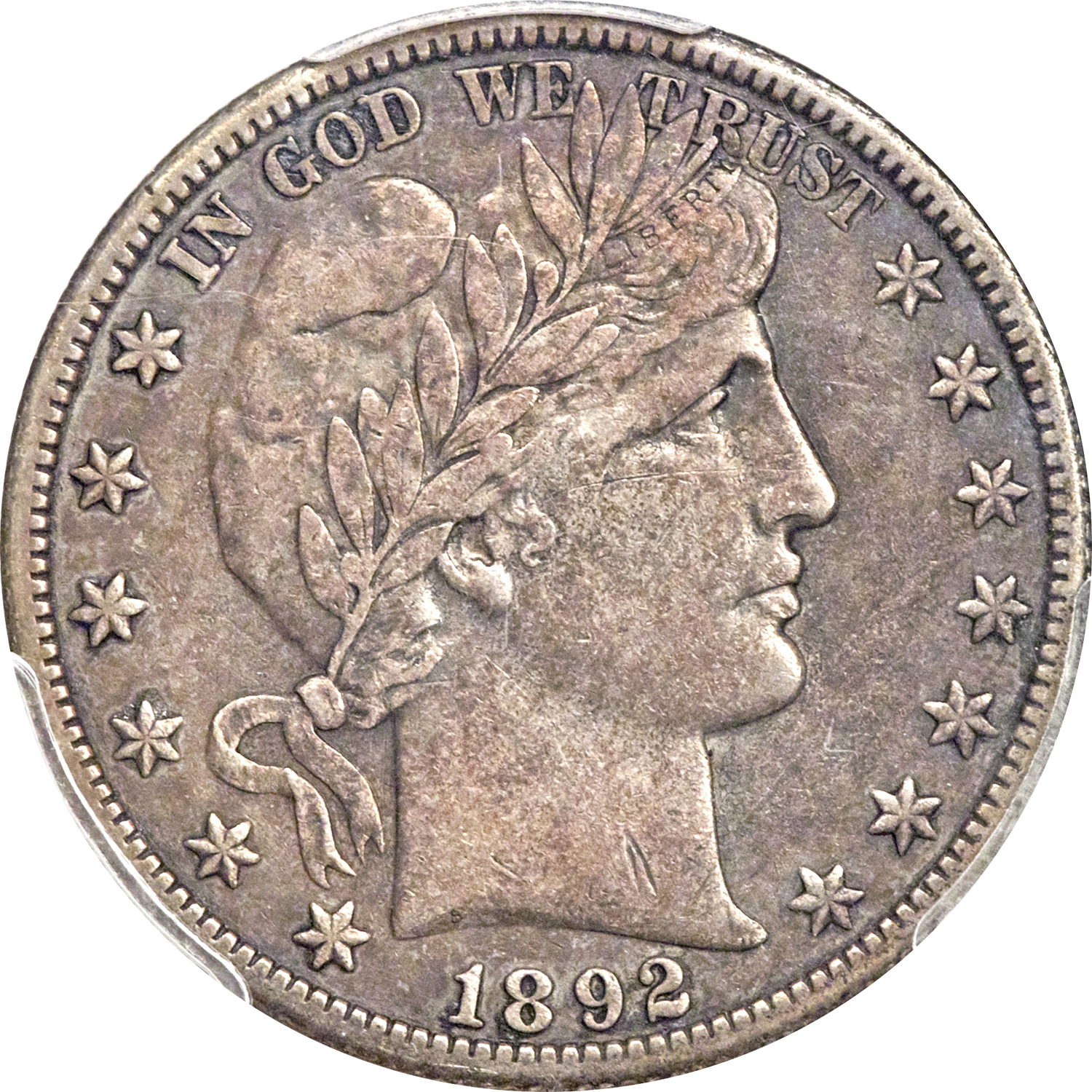 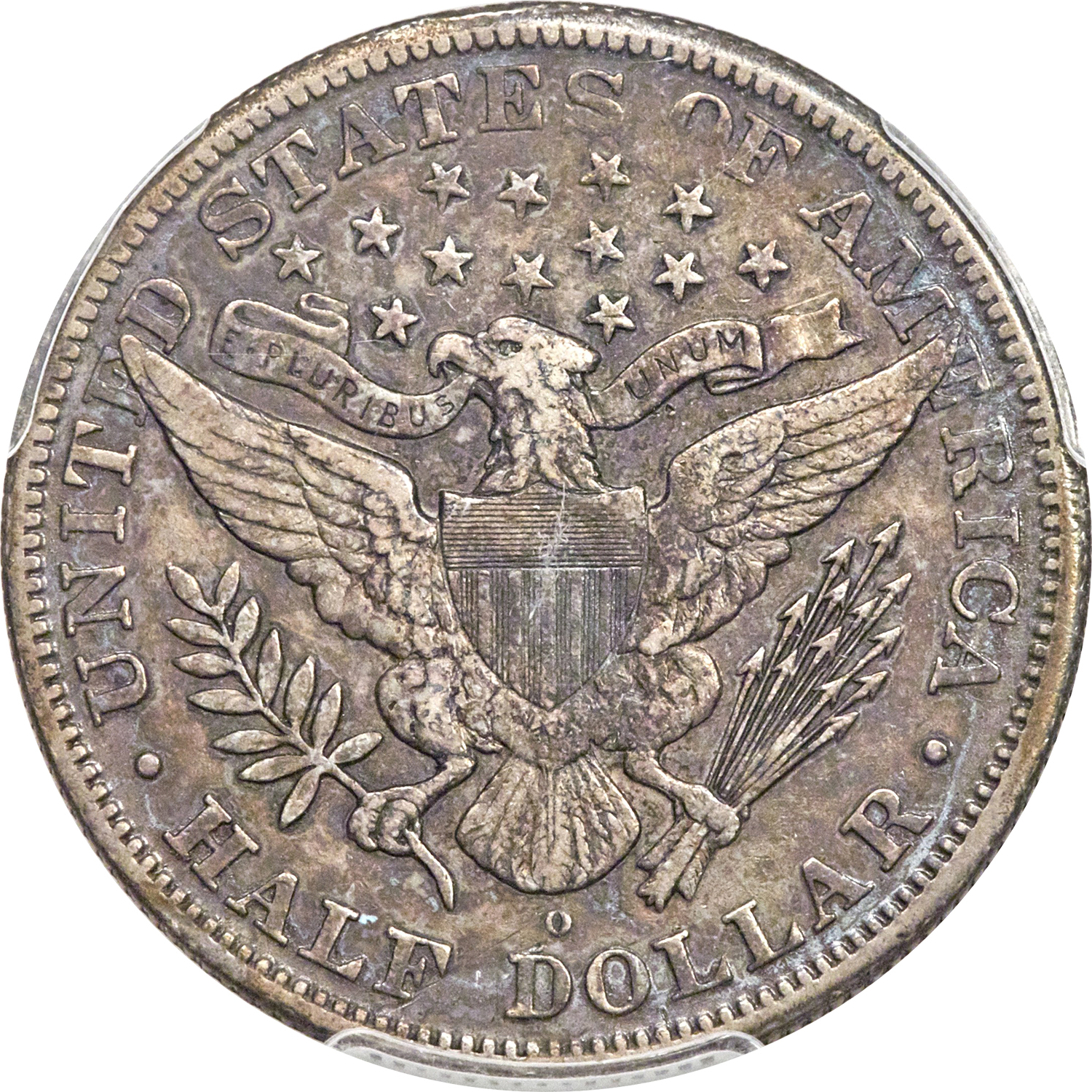 We now move on to one of the great rarities of the Barber series. Lot 3981 is a PCGS VF-30 example of the 1892-O “Micro O” half dollar. Considered to be the only major variety for the Barber half-dollar series, this variety was created when the mintmark of a quarter dollar was inadvertently used on the reverse of one of the dies intended for the New Orleans Mint. It is unknown how many were struck, but virtually all that were made appear to have entered circulation quietly; and since the variety was not discovered until the early 20th century, most examples show advanced signs of circulation. High-grade examples are extremely rare (a very limited number of Uncirculated coins do exist) and come to the market very infrequently. Even in VF this is a well-known rarity, especially with problem-free surfaces and above-average eye appeal. 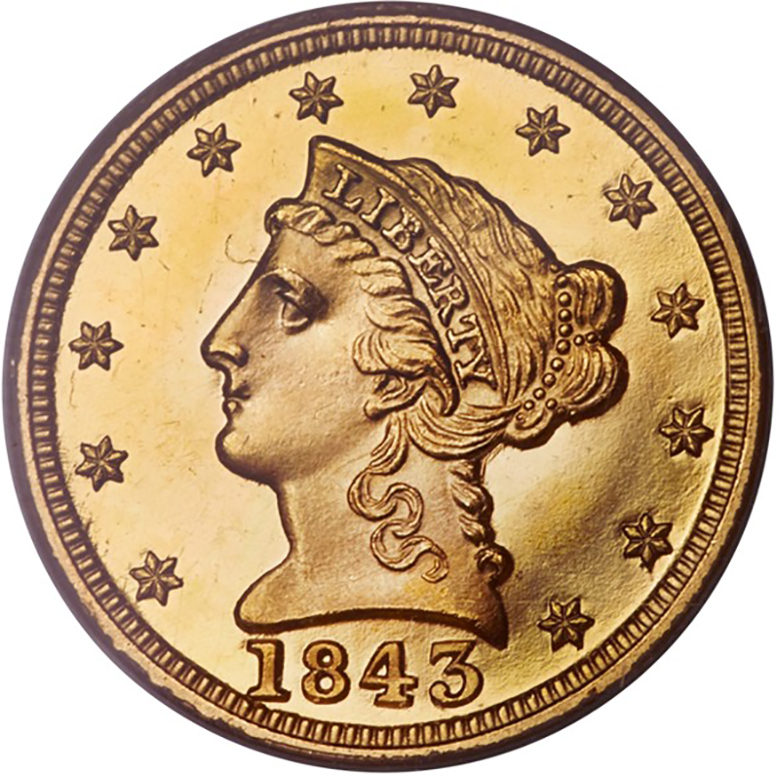 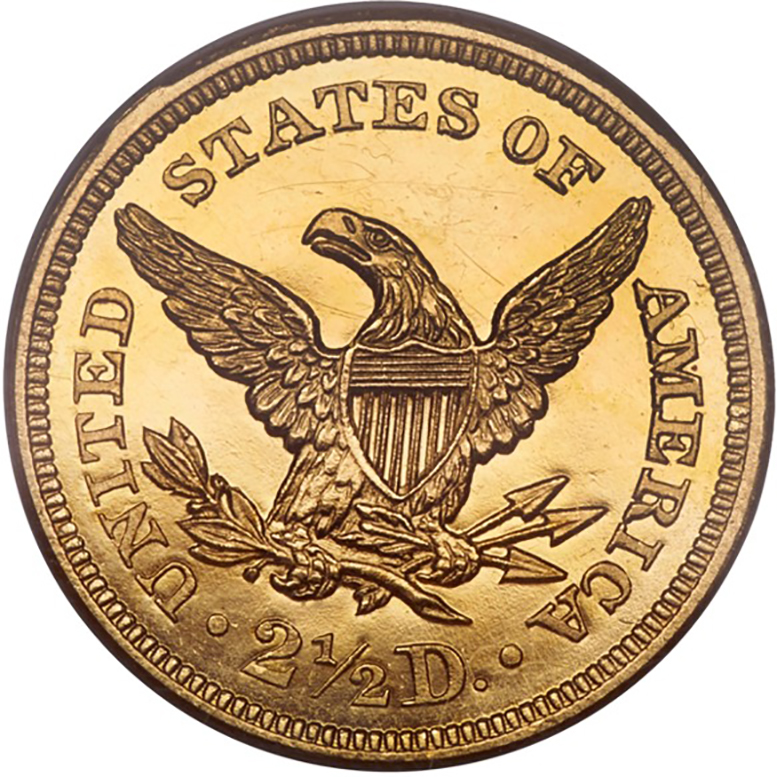 Liberty quarter eagles are a personal favorite of your author, and if there were only one that I could ever own, lot number 4096 would be a very strong candidate. This 1843 Proof quarter eagle, graded PF-65 DCAM by PCGS and stickered by CAC, is one of only half a dozen (or maybe even five) Proof examples known to exist of this date. Any 19th-century Proof coin is considered rare, but examples dated prior to 1858 are particularly rare for the same reason mentioned above for the half cent: no commercial Proofs were struck before that date. For the very limited number of coins that do exist, condition is often a problem as well, as very few of these coins were handled properly, and many show hairlines, signs of cleaning, or even damage. This particular example does not, and it is considered to be the single finest known example of this date. A truly magnificent 19th-century American gold coin. 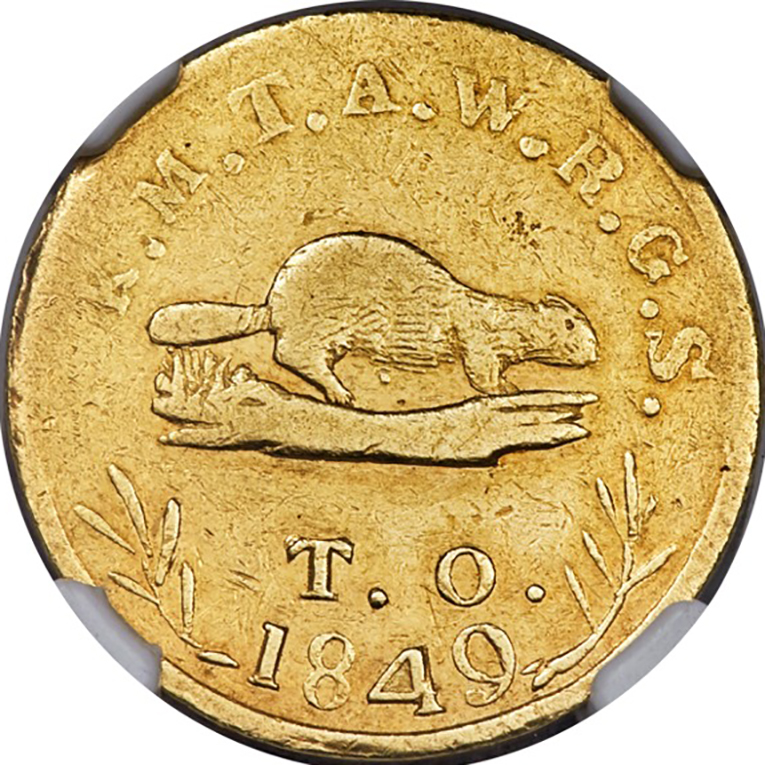 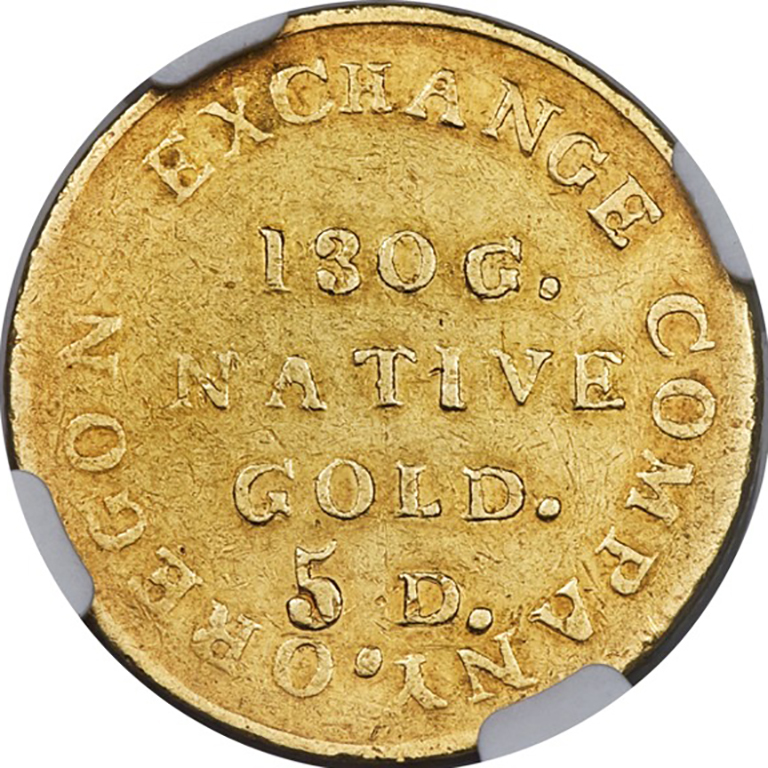 The final coin we will take a look at is also a gold coin from the 1840s, but is in a different category all together. Lot 4247 is an 1849-dated $5 gold coin from the Oregon Exchange Co., graded AU-50 by NGC. Related to the California gold rush, this particular piece was struck after March of 1849 at a private mint in Oregon City from the gold dust that arrived from the goldfields of California. The now extremely rare coins provided a much-needed medium of exchange for the (small) local population. An estimated 6,000 five-dollar gold pieces were struck in the Oregon Territory (along with approximately 2,850 ten-dollar gold pieces of the same design), but of these very few still remain. They are also nicknamed “beaver money” because of the animal on the obverse—a very common sight in that part of the country at the time, and a creature that played an important role in the early Oregon economy.  The rest of the design is very basic and features several errors, such as “T.O.” instead of “O.T.” for Oregon Territory. Despite this, the coins were readily accepted in commerce, which perhaps also contributed to their rarity today.   ❑