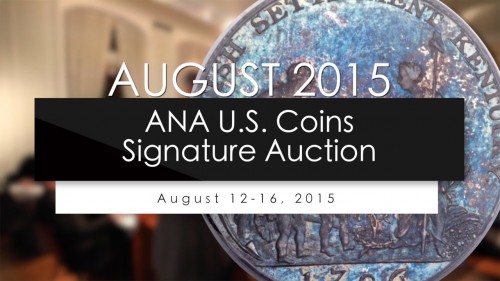 With the largest show of the year once again behind us, it’s time to look back at the U.S. coin auction organized by Heritage Auctions in conjunction with the ANA show in Rosemont, IL last week. The auction saw a wide variety of coins being sold, ranging from high grade 20th century rarities to seldom encountered colonial coins. In this recap we will take a look at some of the most noteworthy results from the various sessions. The entire auction can be reviewed on the Heritage Web site. Please note that all prices mentioned include a 17.5% buyers premium.

One of the true highlights of the auction was a high grade rarity that can be counted among some of the best preserved American Federal coins from the 18th century. Lot 3921 was an amazing 1793 Wreath cent, S-6 variety, graded MS-66RB by PCGS. While there are a few others graded at such a high level, coins such as this one rarely come up for sale, which is not a surprise as they are well over 200 years old. The survival of such a coin can be considered to be a true miracle (if there is such a thing in numismatics) and bidding was spirited. 17 bidders competed for the coin, which sold for $399,500 to an internet buyer.

We will go back to the 19th century for some additional rarities sold at the auction. Lot 4057 was a PCGS SP50 (specimen) 1838-O Capped Bust/Reeded Edge half dollar. A rarity with only nine examples known to exist, the date was struck in Proof/Specimen format only, with allegedly just 20 coins minted to commemorate the opening of the New Orleans Mint. The coin, which carries a pedigree back to the late 19th century, sold for $293,750. Another 19th century rarity from the New Orleans Mint was offered as lot 4060, a PCGS VG8 1853-O No Arrows Liberty Seated half dollar, which sold for $199,750. Among the rarest of all half dollars, only four are known to exist, of which this VG8 is amazingly the second finest, only surpassed by a single VF.

There is one more 20th century lot that we would like to mention, thanks to its incredible rarity. Proof early commemoratives are extremely rare, with very few struck, and none sold to collectors. Many early commemoratives are only known in business strike format, but there are a few exceptions. Lot 4531 was a complete Matte Proof set (P, D, and S mintmarks) of the 1937 Daniel Boone Commemorative half dollar, each coin graded PF-63 Matte by NGC. Struck for unknown purposes and at an unknown date, the set saw enthusiastic bidding from commemorative specialists, ultimately realizing $199,750.

Also worth noting are the high power lots that failed to sell. A gem (PCGS MS-65) 1792 half disme offered as lot 3977 failed to meet the reserve, as did lot 4562, an 1855 Wass, Molitor & Company Territorial twenty dollar gold piece graded AU-53 by NGC and believed to be unique. Another coin that failed to meet the reserve was one that we covered in our preview article, the 1849-C Open Wreath Gold Dollar graded MS-62 by PCGS. A major rarity, the coin had been offered earlier this year in another Heritage Auction, then graded MS-63 Prooflike by NGC and sold for $493,500. The coin was offered on the Heritage website as a post-auction buy for $616,875, which would indicate that the reserve was perhaps set quite high given the prior sale earlier this year. Overall, however, the auction saw a high sell-through rate, making the auction a success for many of the consignors.

All images courtesy of Heritage Auctions.