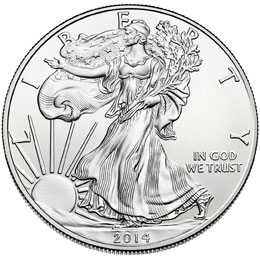 Strong monthly sales for the United States Mint’s American Silver Eagles have put year to date sales ahead of the prior year total for the corresponding period. This opens up the possibility of another record breaking year for the popular silver bullion coins.

Silver Eagle sales for the year to date have now reached 18,469,500 pieces. Importantly, this figure is ahead of the sales of 18,310,000 from the comparable year ago period. This represents the first time during 2014 that year to date sales have exceeded comparable figures from the prior year.

Last year, the US Mint had set an annual sales record for the American Silver Eagle at 42,675,000 pieces.

During April 2014, American Gold Eagle bullion coin sales reached 38,500 ounces across the four different size options. This marked a strong gain from the prior month when sales had reached 21,000 ounces. However, the figure was down sharply from the year ago period of April 2013 when a sudden drop in the price of gold had spurred a sales surge to 209,500 ounces.

For the year to date, Gold Eagle sales have reached 182,000 ounces. This is down from the sales of 502,000 ounces during the comparable prior year period.

During the month, the US Mint also recorded sales of 17,500 of the one ounce 24 karat American Gold Buffalo coins. The America the Beautiful Five Ounce Silver Bullion Coins reached sales of 10,800 pieces, resulting in the temporary sell out of the Great Smoky Mountains National Park design.