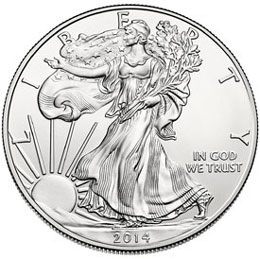 For the month of October 2014, the US Mint recorded sales of 5,790,000 of the one ounce American Silver Eagle bullion coins. This represented a gain of 87.6% compared to the year ago period of October 2013 when sales had reached 3,087,000 ounces. The figure also represented the highest monthly sales total since January 2013.

The extremely strong sales during October open up the possibility of another record year for Silver Eagle bullion sales. Year to date sales have now reached 38,041,000 ounces. The current annual sales record was established last year at sales of 42,675,000 ounces.

For the year to date, Gold Eagle bullion sales have reached 446,500 ounces. Despite stronger sales experienced in recent months, the annual sales total is running far behind the prior year. For the full year of 2013, Gold Eagle sales had reached 856,500 ounces.

On October 1, the US Mint officially concluded sales for the 2014-dated American Platinum Eagle bullion coins. The final orders from authorized purchasers added 400 of the one ounce coins, bringing total sales to 16,700. This year, the US Mint resumed the offering of the platinum bullion product after a gap of more than five years.

American Gold Buffalo bullion sales reached 21,000 ounces during October 2014. This represented the second highest monthly sales total for the product this year, only behind the seasonally strong month of January.

Lastly, the US Mint recorded sales of 4,600 of the America the Beautiful 5 oz Silver Bullion Coins during October. Year to date sales across the four designs released so far have reached 93,600.The final design of the year featuring Everglades National Park will go on sale to authorized purchasers on November 3.