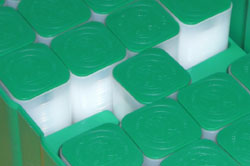 The United States Mint recently provided details related to the availability of 2010 American Silver Eagle bullion coins. In the past, the US Mint would generally begin producing the Silver Eagle bullion coins bearing the following year’s date in November or December. Authorized purchasers would be able to order the coins in late December for delivery in early January.

There have been several changes to the typical procedures related to US Mint bullion coins this year, as the United States Mint struggled to meet public demand for the bullion coins amidst a limited supply of precious metals blanks.

For the first half of 2009, sales of Gold and Silver Eagle bullion coins were subject to allocation at the authorized purchaser level. During this time the production of fractional gold bullion coins and platinum bullion coins was delayed. The fractional gold coins were eventually produced in December and the platinum coins were canceled. After the allocation program had been lifted for several months, it was resumed in December following a sales suspension. The US Mint canceled popular collector versions of the Gold and Silver Eagle due to the limited supply of blanks.

Despite the suspensions and allocations, the US Mint will achieve record annual sales for the American Silver Eagle bullion coins. To date, the US Mint has sold 28,399,000 of the one ounce silver coins. The prior record for annual sales occurred in 2008, when 19,583,500 coins were sold.

In the coming year, the US Mint will face an additional obstacle in fulfilling demand for their bullion products. The US Mint will begin a second silver bullion coin program featuring over sized duplicates of circulating quarter designs. The  America the Beautiful Silver Bullion Coins will contain 5 ounces of .9999 silver and will bear designs which are exact duplicates of the designs used for the America the Beautiful Quarters series. Details on the release and availability of the coins has not yet been announced.