The American Platinum Eagle was introduced in 1997 as the first investment grade platinum coin issued by the United States Mint. Bullion coins in four different sizes were released featuring a portrait of the Statue of Liberty on the obverse and a soaring bald eagle on the reverse. The same year, proof versions of the coin were released for collectors which featured the same design. From 1998 to present, the collector proof versions have featured different reverse designs, typically coordinated as part of a multi-year design theme. Bullion versions of the coin have not been produced since 2008. 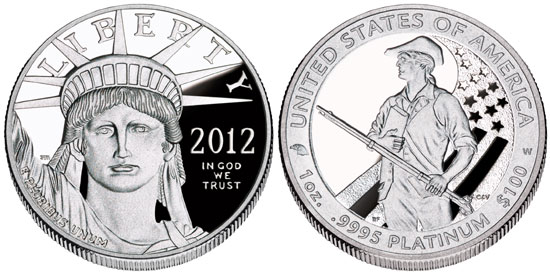 The reverse design of the 2012 Proof Platinum Eagle depicts the principle “To Provide for the Common Defence”. The design by Barbara Fox depicts a Minuteman from the Revolutionary War representing the protection and defense of the country during its early days. A rifle and book are carried by the Minuteman to symbolize the importance of knowledge in defending the nation. The obverse design features the portrait of the Statue of Liberty by John Mercanti that has been used for all issues of the series.

A maximum mintage of 15,000 coins has been established for this release. An initial ordering limit of 5 coins per household will be imposed. The initial price for the coin is $1,692, although this may be adjusted on a weekly basis based on the average market price of platinum. 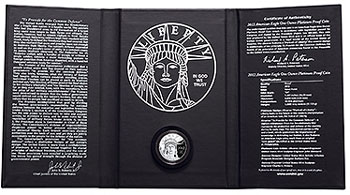 The six year “Preamble” design series is scheduled to run from 2009 to 2014. Each of the reverse designs within the series are inspired by narratives prepared by Chief Justice of the United States, John G. Roberts, Jr. His narratives appear on the inner portion of the folder containing the Proof Platinum Eagle.