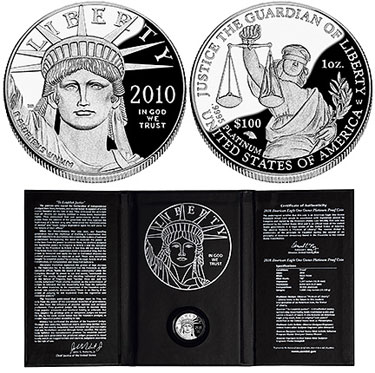 The reverse design of the 2010 American Platinum Eagle Proof Coin features blindfolded justice holding scales in one hand and a laurel branch in the other. The image is representative of the theme “To Establish Justice” based on a narrative prepared by John G. Roberts Jr., Chief Justice of the United States. The reverse was designed by US Mint Artistic Infusion Program Master Designer Donna Weaver and sculpted by Sculptor-Engraver Phebe Hemphill.

The obverse of the coin, which depicts the Statue of Liberty, was designed by the US Mint Chief Engraver John Mercanti. This design has been used as the obverse for all American Platinum Eagle coins.

The 2010 Proof Platinum Eagle contains one ounce of 99.95% pure platinum and carries a legal tender face value of $100. The coins have a maximum mintage of 10,000 coins, with an initial ordering limit of five coins per household. Coins are packaged in a custom designed portfolio presentation case. The Chief Justice’s narrative appears on one side, with a certificate of authenticity and coin release information on the other side. The price for each coin is $1,892 plus shipping and handling. Prices for the coins may be adjusted weekly based on changes in the price of platinum.

Last year, the 2009 Proof Platinum Eagle presented the theme “To Form a More Perfect Union”. Future releases will depict the themes “To Insure Domestic Tranquility”, “To Provide for the Common Defense”, “To Promote the General Welfare”, and “To Secure the Blessings of Liberty to Ourselves and Our Posterity”.