The United States Mint has started accepting orders for the 2013 American Platinum Eagle Proof Coin. This represents the fifth release within a six coin series which highlights the core concepts of American democracy from the Preamble to the U.S. Constitution.

The first release within the design series featured the concept “To Form a More Perfect Union” (2009) with a depiction of four faces representing the diversity of the Nation. This was followed by “To Establish Justice” (2010) with a design featuring a blindfolded Justice holding scales, “To Insure Domestic Tranquility” (2011) featuring a harvest goddess emerging from a field of wheat, and “To To Provide for the Common Defence” (2012) featuring a Colonial Minuteman.

This year’s design features the concept “To Promote the General Welfare” and carries a depiction of Young American looking towards the future. Three gears are present within the background to represent the interconnection of power between the states and national government. Inscriptions within the circular border read “United States of America”, the denomination “$100”, and the precious metal weight and content “1 oz. .9995 Platinum”. The American Eagle privy mark also appears, which is from an original coin punch identified at the Philadelphia Mint. The reverse was designed by Joel Iskowitz and engraved by Charles L.Vickers.

The obverse design of the coin features a rendition of the Statue of Liberty designed and engraved by John Mercanti. The inscriptions include “Liberty”, the date “2013”, and the mottoes “In God We Trust” and “E Pluribus Unum”.

The 2013 Proof Platinum Eagle carries a maximum mintage of 15,000. There is an initial ordering limit of five units per household.

Initial pricing for the release is set at $1,800. This is based on an average price of platinum within the $1,400 to $1,449.99 range. Pricing may be adjusted weekly based on changes in the market price of platinum. 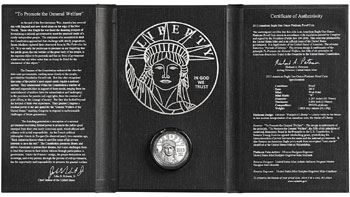 Each coin comes housed in a portfolio presentation case. The case includes the narrative prepared by Chief Justice John G. Roberts on the concept “To Promote the General Welfare” which served as the inspiration for the coin’s design.