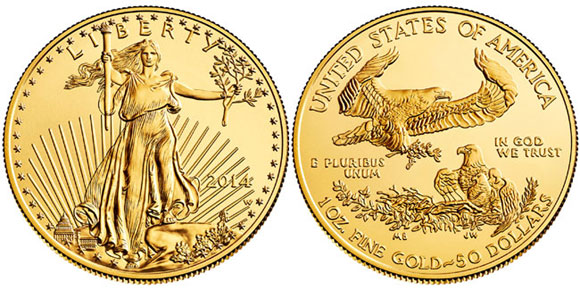 The American Gold Eagle features the classic depiction of Liberty created by Augustus Saint Gaudens for the circulating gold double eagle. Liberty is depicted holding a lit torch and olive branch as she steps confidently forward against the rays of the rising sun. An image of the U.S. Capitol building appears in the distance and 50 stars surround. The reverse contains a depiction of a family of bald eagles created by Miley Busiek for the bullion and collector coin series. A male eagle is shown bringing an olive branch to a nest containing a female eagle and eaglets.

The 2014-W American Gold Eagle Uncirculated Coin represents a numismatic version of the coin struck on specially burnished blanks and bearing the “W” mint mark to denote production at the West Point Mint. The coins come housed in a plastic capsule and presentation case with a certificate of authenticity.

The United States Mint offers the coins without a stated maximum mintage and without a household ordering limit. For the start of sales, the one ounce gold coins are priced at $1,575.00 each plus applicable shipping and handling. The pricing may be adjusted as frequently as weekly based on the average market price of gold.

The Mint has previously released collectible proof versions of the 2014 Gold Eagle, available in four different sizes. Bullion versions of the coin have also been available across the four sizes since their release on January 3.