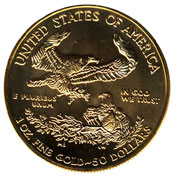 The United States Mint will begin taking orders for 2010 American Gold Eagle bullion coins from authorized purchasers on January 19, 2010. The initial ordering date is later than typical for US Mint bullion coins.

In previous years, orders from authorized purchasers have been accepted in late December for delivery in early January. The change in typical procedures comes as heavy demand for bullion coins caused a recent sales suspension for one ounce Gold Eagles, the sell out of fractional Gold Eagles, and the resumption of an allocation program that rations coins at the authorized purchaser level.

The US Mint will initially accept orders for only the one ounce 2010 Gold Eagle bullion coins. For 2009, the fractional weight coins had their release delayed until December 3, 2009 rather than being offered throughout the year. The fractional bullion weight coins include one-half ounce, one-quarter ounce, and one-tenth ounce coins.

Collectors will continue to watch announcements and sales trends for indications of whether the US Mint is catching up on the demand for their bullion coins. The ability of the US Mint to satisfy the full public demand with available precious metals blank supplies will be the determining factor on whether collectible versions of the coins can be produced in 2010.