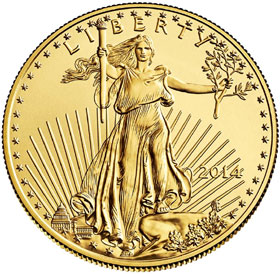 During September 2014, American Gold Eagle sales measured 58,000 troy ounces across the four available sizes, representing the highest monthly sales total since January. The top seller was the one ounce size, with smaller contributions from the one-half ounce, one-quarter ounce, and one-tenth ounce sized coins. The total sales are more than double the level of the prior month when 25,000 ounces were sold. The latest monthly sales are up sharply compared to the year ago period when sales were only 13,000 ounces.

For the year to date, Gold Eagle bullion sales have now reached 379,000 ounces. During the comparable year ago period sales had reached 704,000 ounces.

Sales of the American Silver Eagle bullion coins reached 4,140,000 troy ounces for September, representing the highest monthly sales level since March. The latest monthly sales were more than double the prior month sales of 2,007,500. The amount was also up compared to the year ago period when sales had reached 3,013,000.

For the year to date, Silver Eagle bullion sales have now reached 32,251,000 ounces. This trails the sales level of 36,088,000 ounces from the comparable year ago period.

American Platinum Eagle bullion coins saw sales of 2,700 ounces. This actually represented the second highest monthly sales level since the offering was brought back in March of this year, following a five year gap in production. The US Mint announced the conclusion of sales for the 2014-dated coins to authorized purchasers on October 1.

The 24 karat American Gold Buffalo bullion coins had sales of 14,500 ounces for the month, bringing year to date sales to 139,500 ounces.

Sales for the America the Beautiful 5 oz Silver Bullion Coins reached 10,200 units for the month, representing 51,000 ounces of silver content. During the month, the US Mint sold out of the Arches National Park design at 22,000 units.