The US Mint recently unveiled the final designs for each of the 2010 America the Beautiful Quarters at a special ceremony held on March 24, 2010 in Washington, DC. The line art drawings for each coin are shown below. 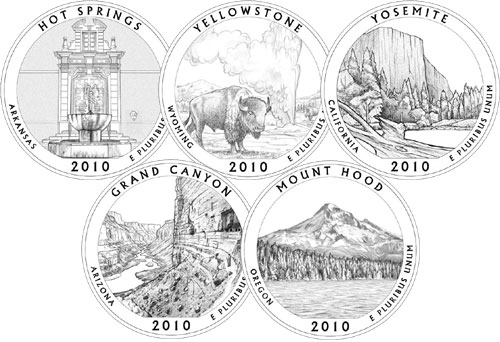 The release dates for this year’s quarters were made available by the Federal Reserve Banks, which are responsible for distributing circulating coinage to depository institutions to meet transactional demand. The release dates are still considered estimated, although there have not typically been changes to past estimated release dates provided.

For most circulating coin series with rotating designs, the Federal Reserve Banks has provided depository institutions with special ordering periods during which they could order unmixed quantities of the latest release. For the America the Beautiful Quarters Program, there are no special ordering periods established. Even if depository institutions place orders on or around each new designs release date, there will be no guarantee that they will receive any quantity of the new design. This will likely have an impact on the availability of each release through the channels of circulation.

The United States Mint will offer for sale circulation strike America the Beautiful Quarters at each release date. The coins will be available in 100-coin bags from the Philadelphia or Denver Mint priced at $35.95 per bag, or a two roll set containing one roll from each mint priced at $32.95.