Release dates for the 2012 America the Beautiful Quarters have been provided by Federal Reserve Banks Services. These coins will continue the series of circulating quarter dollars featuring a national park or site from each of the 50 states, 5 territories, and the District of Columbia.

The releases scheduled for 2012 will feature El Yunque National Forest in Puerto Rico, Chaco Culture National Historic Park in New Mexico, Acadia National Park in Maine, Hawaii Volcanoes National Park in Hawaii, and Denali National Park in Alaska. The obverse of each coin includes the 1932 portrait of George Washington designed by John Flanagan. The reverse includes a design representative of the national park or site. 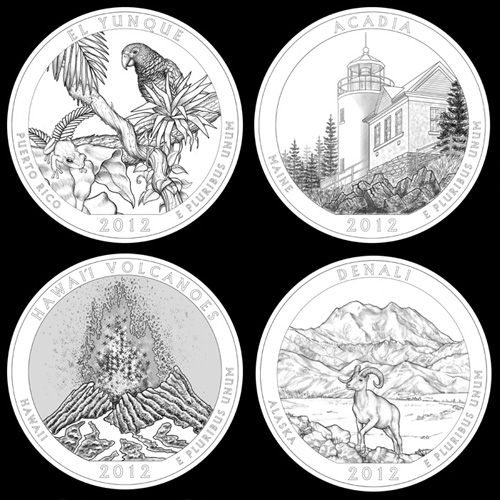 Final reverse designs for the 2012 America the Beautiful Quarters are yet to be announced by the United States Mint. A selection of design candidates have already been reviewed by the Commission of Fine Arts (CFA) and Citizens Coinage Advisory Committee (CCAC) in October 2010. The final designs will be selected by the United States Secretary of the Treasury after considering the input of the Director of the United States Mint, Secretary of the Interior, chief executive of the host jurisdiction, CFA, and CCAC. The designs included above are the recommendations of the CCAC. (See previous CoinUpdate articles for the CCAC’s discussion of the designs and the CFA’s official recommendations.)

The published circulation release dates for the 2012 quarters are listed below. Besides the coins produced and released into circulation, the United States Mint also produces certain numismatic versions of the coins, which are sold by the Mint at a premium in various product releases throughout the year.

Unlike the Presidential Dollars, the Federal Reserve Banks do not provide a special ordering period for banks and financial institutions to order unmixed quantities of each newly released quarter design. This has made it difficult for collectors to acquire the coins at banks or within circulation at face value.

Also contributing to the absence of the coins in the channels of circulation is the reduced number of quarter dollars produced by the Untied States Mint since the start of the series. The total number of quarters struck for circulation for the first nine designs of the series is 595 million pieces. This amount for nine different designs is still less than the 774.8 million coins produced for the first design of the 50 State Quarters Program.

For anyone seeking to actively collect the series, this previous CoinUpdate article provides some advice on where to find National Park Quarters.