The United States Mint has provided details for the launch ceremonies to mark the release of the next two coins in the America the Beautiful Quarters Program featuring Glacier National Park and Olympic National Park.

The America the Beautiful Quarters feature a National Park or site from each of the 50 states, 5 territories, and the District of Columbia in the order federally designated. The design representing each site appears on the reverse of the coin, while the obverse features a portrait of George Washington. The series began in 2010 and is scheduled to run until 2021. Five different designs will be released each year through 2020, with a single design for the last year of the series. 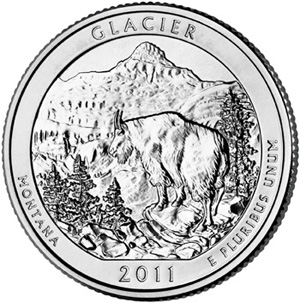 The Glacier National Park Quarter features a view of the northeast slope of Mount Reynolds with a mountain goat standing on a rocky slope in the foreground. This was designed by Susan Gamble and sculpted by Michael Gaudioso. A launch ceremony for the coin will be held on April 13, 2011 at 1:00 PM MT, located at Columbia Falls High School, 610 13th Street West, Columbia Falls, Montana. The evening before at 5:00 PM MT, a public coin forum will be held at the Glacier National Park Community Building at park headquarters in West Glacier, Montana. The official circulation release date for the coin takes place earlier on April 4, 2011. 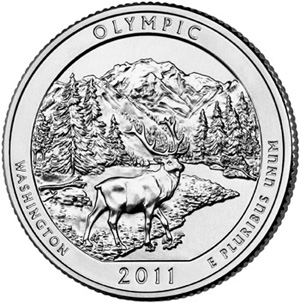 The Olympic National Park Quarter features a Roosevelt elk stepping into the Hoh River with a view of Mount Olympus in the background. The design is by Barbara Fox, with sculpting by Charles Vickers. The launch ceremony is scheduled for June 14, 2011 at 11:00 AM PT, located at City Pier in Port Angeles, Washington. The coin forum will be held the evening before at 7:00 PM ET in Olympic National Park Visitor Center, 600 East Park Avenue, Port Angeles, Washington. The official circulation release date for the coin takes place on June 13, 2011.

Each launch ceremony is open to the public and includes entertainment, historical commentary, and participation by school children. Representatives of both the United States Mint and the National Park Service are typically in attendance. Children aged 18 and younger receive a free coin to commemorate the day, while other attendees are able to exchange currency for rolls of newly minted quarters. With distribution less widespread for America the Beautiful Quarters as compared to the prior State Quarters Program, these ceremonies have been one of the dependable methods for acquiring each new quarter release.

The launch ceremony for the first release of this year featuring Gettysburg National Military Park was held on January 25, 2011. Details are not yet available for the launch ceremonies for the two remaining releases of this year featuring Vicksburg National Military Park and Chickasaw National Recreation Area. The circulation release dates for these coins are August 29 and November 15, 2011.