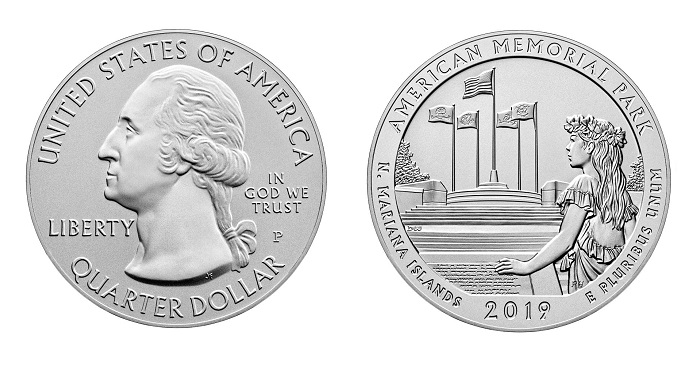 The reverse (tails) design chosen for the Mint’s latest release depicts a young woman in traditional attire at the front of the Flag Circle and Court of Honor. She is resting her hand on the plaque that honors the sacrifice of those who died in the Marianas Campaign of World War II. Inscriptions on the reverse are AMERICAN MEMORIAL PARK, N. MARIANA ISLANDS, 2019, and E PLURIBUS UNUM.

The obverse (heads) design features a restored 1932 portrait of George Washington by John Flanagan. Obverse inscriptions are UNITED STATES OF AMERICA, LIBERTY, IN GOD WE TRUST, and QUARTER DOLLAR.

The American Memorial Park quarter is packaged in the following product options:

The Mint produces the coins in the rolls and bags at the Philadelphia, Denver, and San Francisco facilities. The three-roll set contains coins from all three facilities. Unlike the “P” and “D” mint mark quarters, those with the “S” mint mark will not be released into circulation.