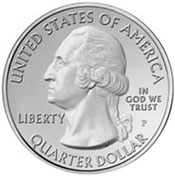 Further details have been provided for the upcoming America the Beautiful Quarters design unveiling. The new series will feature 56 different National Parks and National Sites from across America.

The media-only event will be held on Wednesday, March 24, 2010 at 12:00 PM ET in the Newseum located at 555 Pennsylvania Ave, N.W, Washington, DC. Featured speakers at the event will include United States Mint Director, Edmund Moy; United States Treasurer, Rosie Rios; Secretary of the Interior, Ken Salazar; the writer and co-producer of The National Parks: America’s Best Idea, Dayton Duncan; and other elected dignitaries.

A live webcast of the ceremony will be available at www.americathebeautifulquarters.gov/webcast/ (The website will be live 15 minutes ahead of the presentation.)

The America the Beautiful Quarters series will continue with five new designs per year until a quarter has been released to feature a National Park or other National Site in each state, U.S. territory, and the District of Columbia. The sites will be featured in the order that the sites were first federally designated.