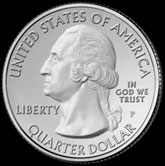 Next year, the United States Mint will begin a new series of circulating quarter dollars with rotating reverse designs known as America the Beautiful Quarters. Quarters will be released featuring a different National Park or National Site in each state, United States territory, and the District of Columbia. The new designs will be released at a rate of five per year, with a single design in the final year.

Some collectors are eagerly awaiting the new series as a continuation of the prior eleven years of circulating quarter designs. From 1999-2008, the United States Mint issued a series of State Quarters which featured designs representative of the fifty states. In 2009, a follow up series was issued with a design to represent the District of Columbia and the five United States Territories.

Similar to the prior two series, there will be subscription options available to collectors for United States Mint products. Under this program, collectors sign up to have the Mint automatically ship and bill for selected products as they are released. The following subscriptions are available for America the Beautiful Quarters:

Pricing for each products is yet to be announced by the United States Mint.