Next year the United States Mint’s America the Beautiful Quarters Program will enter it’s second year of release. The series of circulating commemorative quarter dollars features a National Park or site from each state, territory, and the District of Columbia, presented in the order federally designated. 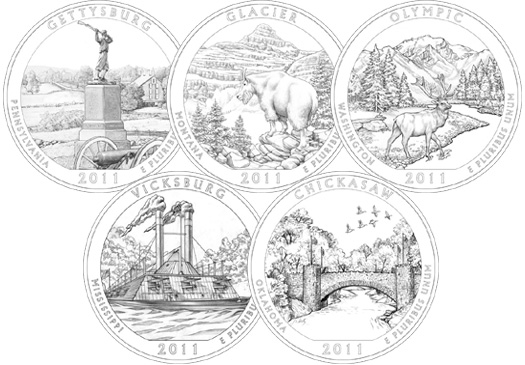 Release dates for each of the issues are now also available. The dates listed below represent the official dates that the coins may be released into circulation. The same dates have also been used as the start of sales for the numismatic bags and rolls, typically offered by the United States Mint. Official launch ceremonies for each quarter have usually been held on or shortly after the circulation release date, at the park or a related location.

The coins will likely make earlier appearances as incorporated into other numismatic products available from the Mint. The 2011 Proof Set, 2011 Mint Set, and 2011 Silver Proof Set, which will contain each of the five releases are expected to be available in January 2011.