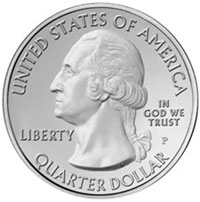 Collectors are still waiting for the new America the Beautiful Quarters series to begin. Recent developments finally put a time frame on when the designs for the first five quarters will be unveiled and when the first quarter will be launched.

The law provides for the redesign and issuance of quarter dollars emblematic of National Sites in each State, the District of Columbia, and each US Territory. The broad definition of National Sites can include any site under the supervision, management, or conservancy of the National Park Service, the United States Forest Service, the United States Fish and Wildlife Service, or similar department or agency of the Federal Government. The law specified that the full register of the 56 sites to be depicted must be selected within 270 days of enactment.

Design candidates for the 2010 America the Beautiful Quarters were reviewed by the Commission of Fine Arts and Citizens Coinage Advisory Committee at meetings which took place later in the month of September 2009. The design candidates were also presented to the Secretary of the Interior and the chief executive of the host jurisdiction. After considering the feedback and recommendations received, the Director of the US Mint makes a recommendation to the Secretary of the Treasury, who is responsible for making the final design selection.

At long last, the Treasury Secretary’s selections will be announced on March 24, 2010 at a ceremony held at the Newseum in Washington, DC. Further details on the ceremony are still to be announced.

The release of the first America the Beautiful Quarter featuring Hot Springs National Park is expected the following month in April. Also on tap are 5 ounce America the Beautiful silver bullion coins, which will bear duplicate designs of the quarters. The release of the bullion counterparts is not expected until at least late summer or early autumn.