The first confirmed example of a 1974 Lincoln Cent struck in aluminum at the Denver Mint will be displayed by Heritage Auctions (www.HA.com) at the upcoming Long Beach Coin, Currency, Stamp & Sports Collectible Expo, held January 30 – February 1, 2014.  The coin will then will be offered as one of the highlights of the Heritage Signature Auction during the Central States Numismatic Society convention near Chicago, April 23 – 27, 2014. 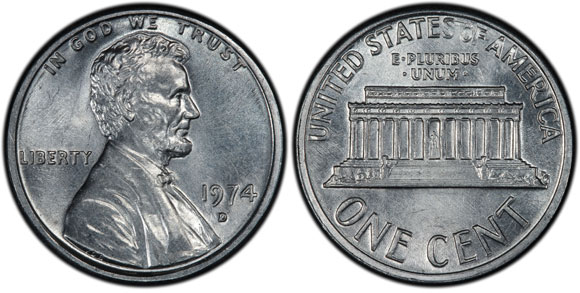 “There’s been speculation about the existence of 1974-D aluminum cents for decades.  Now, there’s a confirmed coin, and a portion of the proceeds from its sale will be used by the sellers to help the homeless,” explained Todd Imhof, Executive Vice President of Heritage Auctions.

“This coin was previously owned by Harry Edmond Lawrence who served as Deputy Superintendent of the Denver Mint at the time it was struck 40 years ago, but its existence only recently came to light when his son brought it to a coin shop in Southern California. This is an amazing discovery, and we estimate the 1974-D aluminum cent will bring a quarter-million dollars or more,” said Imhof.

The coin has been authenticated and certified by Professional Coin Grading Service as MS63.

Faced with rising copper prices, between October 1973 and May 1974 the United States mint struck more than 1.5 million 1974-dated Philadelphia Mint aluminum cents.  Most of the those trial strikes were subsequently destroyed but a few were distributed by the United States Mint to members of Congress and other government officials in case legislation was needed to change the composition of cents.  Mint Director Mary Brooks later requested that all the 1974 aluminum cents be returned, but according to various reports over the years between 5 and 14 were not returned.

One 1974-P aluminum Lincoln cent was certified by PCGS in 2005 as MS62.  It is believed to have been owned at one time by Albert Toven, who was a security guard at the U.S. Capitol in 1974 and reportedly obtained it from a government official. Another 1974-P aluminum cent is part of the Smithsonian’s National Numismatic Collection.

When former Denver Mint Deputy Superintendent Lawrence died in 1980, his son Randy inherited the 1974-D aluminum cent and other coins that his father kept in a plastic sandwich bag.

“I didn’t know what the coins were.  My Father sometimes received coins as gifts during his government service, and I kept them in that same plastic bag in a desk drawer for 33 years,” said Randy Lawrence.

“When I moved with my two children and my elderly Mother from Denver, Colorado to La Jolla, California last August, all the coins were in the trunk of my car for over a month.  I had no idea what that penny was worth.”

A realtor with Lawrence Realty & Associates in Denver, Lawrence was introducing himself to local businesses as a new addition to Berkshire Hathaway Home Services in La Jolla when he met the owner of the La Jolla Coin Shop, Michael McConnell, last August.  In September, Lawrence made arrangements to sell his inherited coins to McConnell.

“I first thought the 1974-D cent was struck on a planchet intended for a foreign country, and I purchased it as such.  But then I started wondering if it might be something else,” McConnell recalled.

He called attorney and Professional Numismatists Guild Legal Counsel Armen Vartian in Manhattan Beach, California for advice.  Vartian contacted well-known error coin specialist Fred Weinberg in Encino, California to get information about the diagnostics and weight specifications of 1974 aluminum cents.  Then Vartian arranged for McConnell to submit the coin to PCGS for authentication and grading.

When the coin was certified by PCGS as a genuine 1974 Denver Mint aluminum Lincoln cent, the only one of its kind known, McConnell called Lawrence to explain that the coin he purchased from him was much more valuable than he previously thought.

“I wouldn’t be able to sleep without notifying him,” McConnell explained.

McConnell and Lawrence now will share in the sale of the 1974-D aluminum cent and will donate “a significant portion of the proceeds” to a San Diego charity that helps the homeless, according to McConnell.

According to a February 21, 1976 story in Numismatic News, the United States government closed its investigation of any missing 1974 aluminum cents by February 1976 having found, in the government’s own words “no evidence of criminal intent” by anyone possessing any of the coins.

For additional information about the auction of the 1974-D aluminum cent, contact Heritage Auctions at (877) 437-4824 or visit online at www.HA.com.