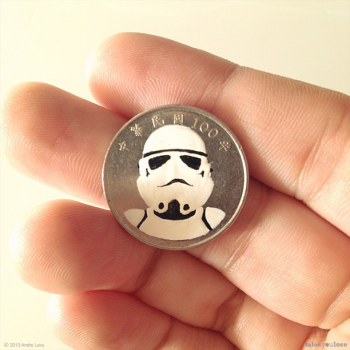 A storm trooper from Star Wars appears on this coin.

Money is a form of art all its own: each coin or piece of paper bears engravings and designs that tell a story or allude to a piece of history. But sometimes the handlers of these tiny works of art are able to take things that at first appear mundane and invest them with new life and interest.

A centuries-old coin will almost always evoke some curiosity on the power of its novelty alone. But what about modern coinage or paper money, which are more likely to be taken for granted?

A coin never looked so delicious (left); Iron Man should watch out for wooden nickels (right).

A Brazilian artist and designer has created a past-time surrounding this very idea. Andre Levy, in a series called “Tales You Lose,” paints coins with pop-culture icons from television, movies, comics, and other inspirations. Levy says of his work, “Coins are actually massively-reproduced little sculptures. This project brings individual character to each replica, and makes us think: Are we able to like one cent more than others, just by injecting new stories in it?”

Characters from the Fantastic Four to Aladdin to Popeye can be found on Levy’s painted coins, each one meticulously matched with the underlying shape and design of the coin. Even Princess Leia and Maleficent make an appearance. But Levy isn’t the first artist I have seen to affect money in this way. When I was at the Chicago ANA this year, I saw an artist who had created beautiful jewelry out of silver coins—including a “sand dollar” necklace that was made out of a silver dollar. Clever. There was also an educational exhibit based on coins that had been transformed into something else—tiny pots, pans, skillets, etc. I was fascinated by the tiny transformations that altered my perception of the coinage and made me look at them in a new way, beyond the face value that I took for granted. 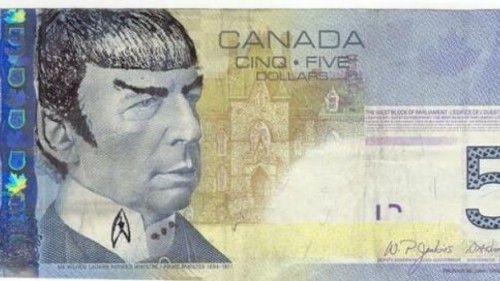 This note has been subject to “Spocking.”

Paper money sees its share of artistic transformation as well. This year, after the death of beloved actor Leonard Nimoy, Canadian $5 notes began to turn up with illustrations of Nimoy’s most famous character, Spock from Star Trek, drawn over the portrait of former prime minister Wilfrid Laurier. This phenomenon was dubbed “Spocking” by social media. Apparently this had been happening for years, with various holders of the bills drawing the visual connection between the Laurier and Nimoy. With the passing of the actor, the incident took a new rise in publicity, even leading to other occurrences of putting celebrities on bills. 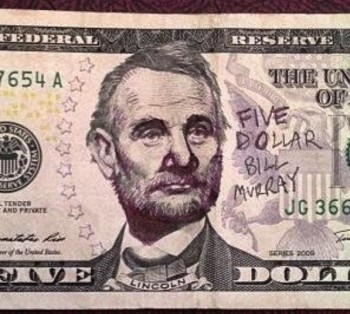 Another note gets a celebrity makeover.

There are certainly as many ways to collect coins or paper as there are varieties and styles of money—some by date, some by country, some by type, some by mint-mark, and some by “cherry-picking” based on tiny details that are perhaps invisible to most. Based on this, one could argue that each coin or piece of paper is utterly unique in itself. Yet there is also a delight in seeing what more an artist or collector may do with the coins and pieces of paper we see every day when they wish to go beyond the usual.