Although I purchase dozens of coins each week for my booth at a nearby antiques mall, sending in coins now to NGC and ANACS as well as PCGS, I take extraordinary care in selecting examples that not only have good eye appeal but that also will grade well.

I purchase most of my coins via Proxibid, the online portal, which features estate auctions in towns and cities that are too distant for me to visit and bid there in person.

In judging luster online, I pay careful attention to the digital photography to ensure that pictures are not unintentionally or deliberately enhanced, which happens now more than ever because (a) photos of coins are often outsourced to photographers with no numismatic experience and (b) digital software now makes automatic image enhancements.

I’m a media ethicist as well as a numismatist. In journalism, enhancing documentary photos is an ethical breach, as this blog post discusses.

So I pay careful attention not only to the picture of a coin on which I will bid, but also to:

1. How other coins by the same consignor are typically depicted. For instance, if one coin looks cleaned, chances are others in a particular auction might be, too. True, auctions often have multiple sellers, but with practice you can group coins that seem to have been mistreated as sliders or that have similar toning or wear.

2. How a modern coin such as a Silver Eagle shows its luster in comparison with an older Peace Dollar, say. If the Silver Eagle glitters naturally, especially if slabbed by a top-tier company, you can make reasonable judgment calls on the condition of the older coin.

3. How the the auctioneer describes the consignment. I have come to know auctioneers by their numismatic knowledge. I know who is honest, who hypes coins and by how much, and who lacks any numismatic experience whatsoever.

I also bid wholesale rather than retail on each coin, to safeguard my investment in case I am wrong. 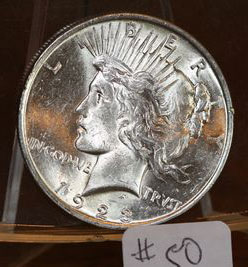 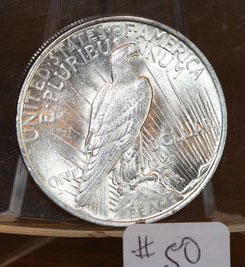 And despite all these precautions, I sometimes fail miserably, as I did with the pictured coin described in the online auction as follows: “1923 Silver Peace Dollar Smokin hot DMPL Coin WOW! You could shave in that mirror!”

The coin as depicted was gorgeous–probably the best Peace dollar luster I had ever seen–online or in person. And I knew and trusted this particular auctioneer, having purchased from him many times before. I won the coin for a modest $75.

When I received the coin, I was more than disappointed; I felt cheated. The 1923 not only was typical, but also damaged, with a distinct rim gouge at 6:15 of the reverse (obscured in part by the auctioneer’s sticker). Photos of how the coin was depicted on Proxibid are shown above with photos of  and how it should have been depicted below. 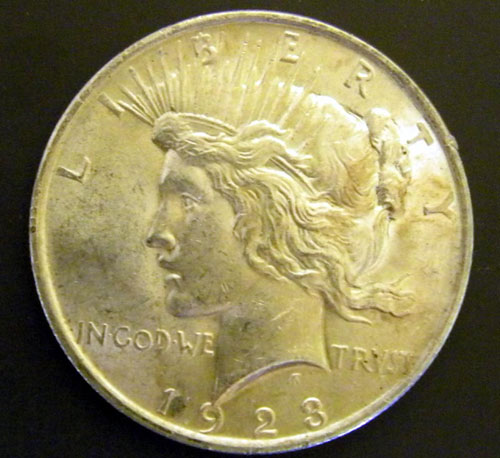 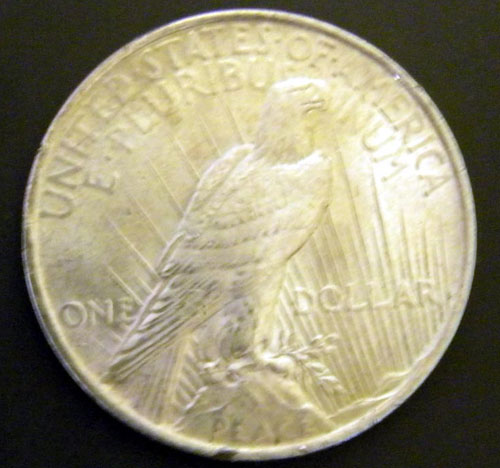 Because I am writing about it, I decided not to send it back for a refund. I also will give the auctioneer the benefit of the doubt because of my past dealings. Perhaps like me he was responding to pictures of a consignment posted by a photographer, rather than viewing the coin personally. Moreover, I won more than a dozen other uncirculated Peace and Morgan Dollars for $25 or less at this particular auction, so I can’t complain about my winnings overall.

Nonetheless, all that glitters online is not luster and descriptions accompanying such coins can be bluster, as this experience documents for Coin Update readers.