The Treasury of the Government of Alderney have issued three new coins which pay homage to the D-Day landings which occurred 70 years ago next month. The D-Day landings are especially important to the Channel Islands since they were the only territory of the British Isles to come under Nazi control. The Channel Islands were occupied by Nazi forces for much of World War II, from the 30th June 1940 until the liberation on the 9th May 1945. The Bailiwick of Jersey and Bailiwick of Guernsey including Alderney – the two British Crown dependencies in the English Channel lie just 10 miles off the coast of Normandy. During their occupation, the policy of the island governments, acting under instructions communicated by the British Government before the occupation, was that of passive co-operation.

The Nazis swiftly organized their administrations of the islands as part of separate military government sectors. The Kommandant issued an order in Guernsey on the 2nd July 1940 and in Jersey on the 8th July 1940 instructing that laws passed by the legislatures would have to be given assent by the Kommandant and that mainland German orders were to be registered as legislation. The civil courts would continue in operation, but German military courts would try breaches of German law. Although plans had been drawn up and proposed as early as 1943 by Vice Admiral Lord Louis Mountbatten for a military reconquest of the islands, these plans were never carried out. Finally, on 6 June 1944 thousands of Allied troops advanced on the beaches of Normandy to begin the operation to liberate France. Many of them would be lost, their bravery remembered for years to come by their comrades and families. The Channel Islands were liberated only after the German surrender. On the 8th May 1945 at 10 am, the islanders were informed by the German authorities that the war was over. Prime Minister Winston Churchill broadcast on the radio at 3 pm during which he announced that hostilities had ended officially at one minute after midnight. 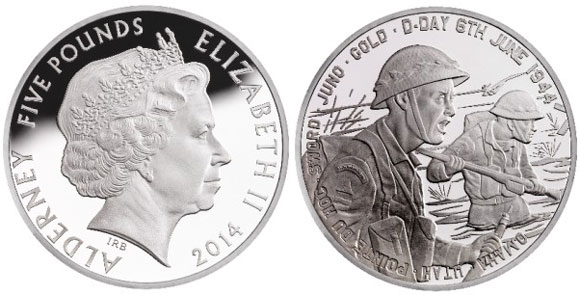 All three coins share the same design and are the work of Royal Mint engraver Lee R. Jones. He portrays two British soldiers wading through the shallows from their landing craft, heading for the fortified beaches ahead, artillery fire creating splashes in the water around them. The scene is depicted as though from a fellow soldier’s viewpoint, giving the coin a sense of the personal story that stands behind one of the most important moments of the Second World War. The coin bears the codenames of the D-Day landing beaches.

The obverse of the coin features the classic portrait of Her Majesty The Queen by Ian Rank-Broadley FRBS and in use on British & commonwealth coinage since 1998.

The cupro-nickel coin is packaged in a colorful folder with the coin included in a blister-pak. The Gold and silver coins are packaged in custom presentation boxes along with the encapsulated coin and is completed with a Certificate of Authenticity to confirm this extremely low issue and a booklet that explores the story of the battle that many believe helped turn the tide of the Second World War.