The Royal Mint have released (9th September) new coins which honor service men and women and mark the centenary of the First World War. Since 2012 The Royal Mint has struck a special Alderney Remembrance Coin bearing a poppy, a well-known symbol of remembrance. That coin featured a striking and award winning image by Emma Noble, one of The Royal Mint’s talented in-house designers. For the centenary in 2014 The Royal Mint has revealed a new design by Royal Mint engraver Laura Clancy. Reminiscent of the poppy petals that fall upon those gathered in the Royal Albert Hall for the annual Festival of Remembrance, the design features falling poppies and is finished with the simple inscription, ‘REMEMBER THE FALLEN’ – a poignant call to ensure that the sacrifice of those lost in the service of their country is never forgotten. 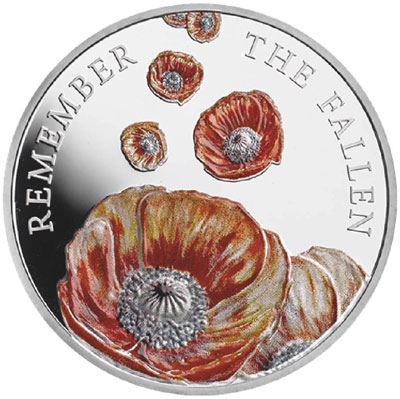 A tri-chromatic printing process layers color onto both the silver and cupro-nickel examples of these coins to capture every detail of the vibrant red coloring of the poppy, which has been worn as a tribute to those who have lost their lives in conflict since the end of the First World War. The obverse side includes the current effigy of HM Queen Elizabeth II created by sculptor Ian Rank-Broadley and in use on most British and British Isles circulation & commemorative coinage since 1998.

The coin is available in cupro-nickel with a Brilliant Uncirculated finish, and in .925 sterling silver, struck to superior Royal Mint Proof standard. Only 2,014 of the sterling silver £5 coins will be struck, and for each coin sold, The Royal Mint will make a donation to the Imperial War Museum, supporting their work in encouraging the study and understanding of the history of modern war.