The Treasury of the Government of Alderney have issued (1st June) a new coin which marks and honors one of the world’s most respected and venerated associations known the world over as being a ‘global force for good’, the Salvation Army, the project of its founder William Booth was founded 150 years ago in 1865 to help the vulnerable and fight social injustice.

William Booth’s upbringing was one touched by hardship, but arriving in London in search of work, the pawnbroker turned preacher was shocked by what he saw. Fueled by a desire to alleviate the suffering he witnessed in the slums of the city’s East End, he sought to bring ‘soup, soap and salvation’ to the destitute and starving – and so the work of The Salvation Army began. Today, the purpose of The Salvation Army is as relevant as it has always been. With more than 100,000 employees and countless volunteers who carry on its work in 126 countries, the presence of the Salvation Army in areas of destitution is for many, a sight of comfort and relief. The distinctive uniforms worn by its officers and soldiers identifies ‘Salvationists’ and is a symbol of availability to those in need. The uniform carries an ‘S’ insignia for ‘Salvation’ and means ‘saved to serve’. 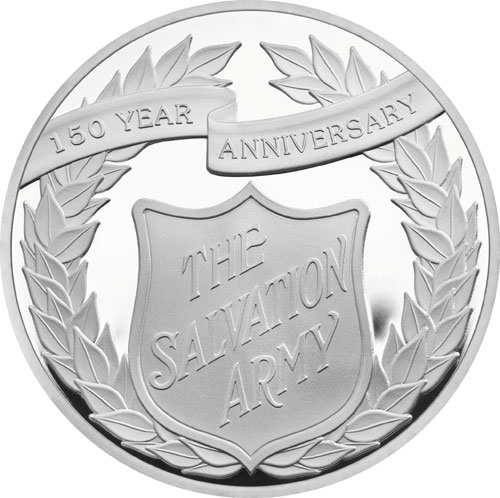 The £5 coin, struck by the Royal Mint on behalf of the Alderney Treasury is designed by Royal Mint engraver Laura Clancy. The reverse features the famous shield insignia first worn by wartime volunteers assisting on the front lines. Inspired by the cheering warmth and familiarity of The Salvation Army Brass Band playing carols, a distinctive feature of any British high street in the run-up to Christmas, the design prompts us to think more deeply about the organization, and the tireless good work that its volunteers are engaged in all year round. The obverse features the well-known effigy by Ian Rank-Broadley.

The coin is available in brilliant uncirculated quality (cupro-nickel) and proof (sterling silver) presented in a colorful folder or in a custom presentation box and capsule for the proof edition. The coins are available directly from the Royal Mint. For more information or to place an order, please visit the Royal Mint product page. Information offered in English, international orders dispatched.