In 1921 the United States Mint issued another commemorative half dollar coin which like some of the others before commemorated the centennial of statehood for an American State. Honored this time was the southern state of Alabama, which had been admitted to the Union in 1819. It seems logical to celebrate the centennial of 1919 with a special commemorative half dollar issued two years later, in 1921, right? Well, actually it does not make any sense at all, and collectors and researchers (including Q. David Bowers, who recalls the story in several of his books) have been mesmerized by these strange circumstances under which the Alabama Centennial Half Dollars were released.

It all started with the centennial celebrations in 1919, which were held throughout the state under auspices of the Alabama Centennial Commission. These celebrations were no strange feat during the first quarter of the 20th century, as many states celebrated the centennial of their statehood, and many states also issued commemorative half dollars to celebrate this. The Alabama Centennial Commission, however, appeared to have ignored such possibility at first, since there did not seem to have been any talk about the issuance of such commemorative throughout the actual centennial year. Discussions do not seem to have commenced until early 1920, when celebrations had already ceased, as legislation was not introduced in Congress until early 1920. Originally calling for a quarter dollar, this was soon amended to the now standard denomination of a half dollar, and legislation was enacted by the 67th Congress in May 1920 as Public Law 66-200. It read in part:

“…as soon as practicable, and in commemoration of the one hundredth anniversary of the admission of the State of Alabama into the Union as a State, there shall be coined at the mints of the United States silver 50-cent pieces to the number of one hundred thousand.”

It took a while to come up with suitable designs for the coins, which meant that the actual coins were not struck until months later, in 1921 in fact. It was now two years after the actual centennial that was being celebrated, and it can only seem likely that most citizens of Alabama had already forgotten the celebrations and had moved on. The Alabama Centennial Commission, however, had not, and asked the wife of James Earle Fraser (who had designed the famous Buffalo Nickel) to execute the obverse design. This would show the busts of the 1819 Governor, William Bibb, and the 1919 Governor, Thomas Kilby. Besides the certain design elements (United States of America, Half Dollar, In God We Trust) that were required by law to be placed on the coin, the obverse also would feature the name of these individuals and twenty two stars, signifying the admission of Alabama into the Union as the 22nd State. The obverse would also have the date of issue, 1921. It also would have an X, signifying the cross (St. Andrews Cross) in the state flag, flanked by two’s on both sides, serving the same purpose. Mrs. Fraser was instructed by Committee Chairman Marie B. Owen to execute the design as such. 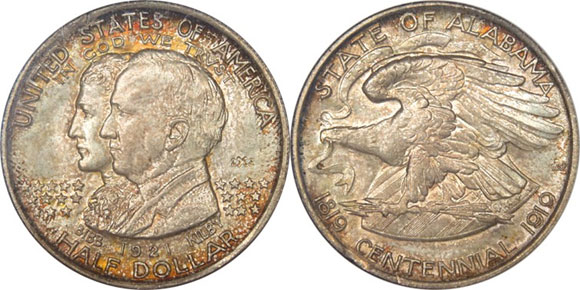 The reverse was also executed by Fraser after its design elements were suggested by Owen. It featured the central element of the Alabama State Seal in use at the time. After Alabama was admitted into the Union, a State Seal had been adopted which featured a map with the outline of Alabama affixed to a tree. This state seal was replaced in 1868 with an eagle facing left, in his beak a scroll with the motto “HERE WE REST”. This motto came from what appears to be an incorrect legend as to how Alabama got his name. An 1842 Florida newspaper had suggested that the name Alabama came from the Muskogean language, meaning “here we rest”. This idea was widely popularized by the time the 1868 state seal was adopted, and thus was used as such. Modern scholars, however, believe that this was an incorrect translation, and discussion continues to this day as to the true meaning of “Alabama”. After the 1921 commemorative half dollar was issued, it was the same Mrs. Owens who would be active in redesigning the state seal once again, and in 1939 the modern state seal was adopted, once again featuring a map with the outline of the state, but this time without the tree. The reverse of the coin also featured the dual dates 1819 and 1919, bringing the total number of dates on the coins up to three.

The final coin designs were not approved until June 1921, and production did not commence until October of the same year, at the Philadelphia Mint. The coins were to be sold to the public at $1 each, with the proceeds going to the Alabama Centennial Commission. Here we also have the reason why two varieties were created, as the “2×2” was later (in December) removed from the dies, creating two distinctly different varieties. It seems that the idea came from the Missouri Centennial commemorative of the previous year, which had featured two different designs based on the same idea, and sales had somewhat increased as such. Owen came up with the idea herself, or so it seems, but the actual impact of sales seems to have been minimal.

Initial sales of the Alabama Centennial half dollar commenced in conjunction with the visit of United States President Warren Harding the same month the coins were struck. While most of the coins seemed to have been picked up by citizens of Alabama and not necessarily by collectors, collectors could hardly skip over one important design element of the coins. The portrait of Governor Kilby on the obverse marked the first time ever that a living person had been depicted on a United States coin. Even to this day, this is an extremely rare feat, and the Mint seems to avoid this situation as much as possible. At the time, however, this did not seem to have been much of an issue, and if there were any complaints about it they were never recorded.

Exact mintages of the Alabama Centennial commemorative half dollars are unknown, and estimates vary widely, as the “plain” designed was introduced while the “2×2”’s were still being struck, and later appear to have been discontinued again in favor of the “2×2” coins. Q. David Bowers has suggested that mintages for both varieties were similar, while other sources generally list the “2×2” as having a much lower mintage (up to a ratio of 1:5). If the Mint records are to be followed (which according to several researchers, are incorrect) the mintage of the “2×2” variety was 16,014 and of the “plain” variety 54,030 were produced.

Certified populations, however, are very similar to each other, which might be because most of the 2x2s were sold at a premium (and thus saved as a memento or by collectors) and that most of the plain coins were distributed by banks (and less likely to be saved in uncirculated condition). No matter what the true mintages and distribution numbers were both issues are very tough to find in gem condition, and as such are one of the key dates a complete set of classic commemoratives.