The Royal Mint of Australia have launched a 50 cent coin which marks the 50th anniversary of one of the country’s most recognizable Aboriginal institutions, the Australian Institute of Aboriginal and Torres Strait Islander Studies or, AIATSIS as it is more well known by its acronym. Australia’s Prime Minister, the Honorable Tony Abbott MP launched the commemorative 50 cent circulating coin at Parliament House in Canberra today. 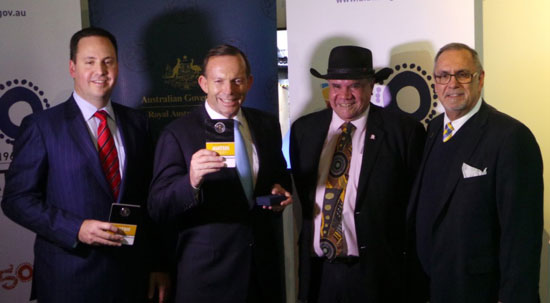 Australia’s Parliamentary Secretary to the Treasurer the Honourable Mr Steven Ciobo MP, the Prime Minister of Australia, Tony Abbott MP along with AIATSIS Chairperson Professor Mick Dodson and AIATSIS Principal Russ Taylor at the launch of the AIATSIS 50 cent coin.

It is a special year for the Institute, marking fifty years since it was formed under an Act of Parliament. AIATSIS concentrates on the study of not just the customs, culture and knowledge of Australian aboriginals but highlights the values and achievements in which all Indigenous peoples’ knowledge and cultures are recognized, respected and valued around the world. Over the past 50 years, AIATSIS has focused on researching and collecting information on all Indigenous people’s knowledge and culture and since become an internationally renowned institution. Since 1964, it has funded programs ensuring the enduring links between Indigenous peoples, their histories and the broader Australian society. 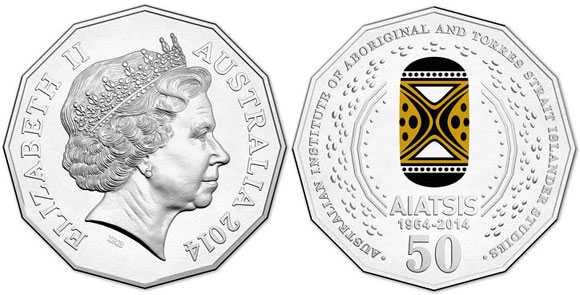 The twelve-sided coin was created in partnership between AIATSIS and the Royal Australian Mint, with both a circulating coin and a special collectors’ edition produced. The uncirculated collectors’ edition will feature a color printed version of the AIATSIS logo. The reverse design features an element of the AIATSIS logo which has been in use since the very beginnings of the Institute when it was adopted by the interim Council in 1963. The remaining design is derived from the boomerang totem of the Gu-na-ni (Kunjen) people from the Mitchell River region of the Gulf of Carpentaria, the shield is a significant piece in AIATSIS’ priceless collection. The obverse includes the current portrait of HM Queen Elizabeth II which is the work of sculptor Ian Rank-Broadley and used on all Australian circulation & most commemorative coins since 2000.

The coin is available from today and is included in a colourful folder which includes informative information about the AIATSIS organisation as well as information describing the intricate and detailed design.

For more information on this and other coins offered by the Royal Australian Mint, please visit their website at: https://eshop.ramint.gov.au/2014-50c-Colour-AIATSIS/510376.aspx Information offered in English, international orders dispatched.