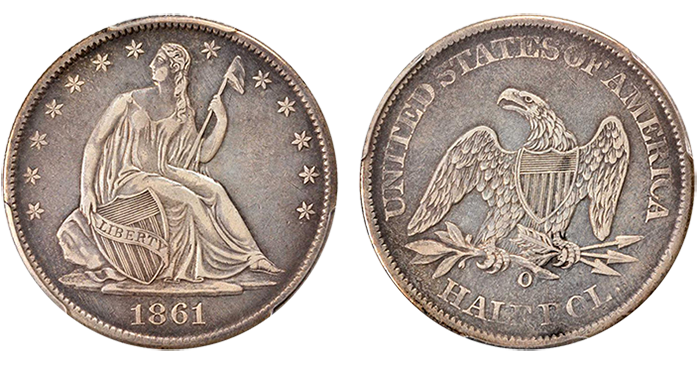 In this series on affordable coins for collectors on a budget, we have reached the final installment on the Liberty Seated design. Even though silver dollars with the design were also struck for circulation, the cost of these in even the lowest grades is more than the $100 limit we set ourselves for these articles. The Liberty Seated half dollar was struck from 1839 to 1891 at various mints around the country, and from 1874 until the end of the series it was the largest denomination with the design by Christian Gobrecht that was being struck for circulation. While many dates are very scarce, others are more affordable, especially in circulated grades, and in this article we will take a look at five interesting dates that provide a lot of collecting fun for $100 or less.

The 1840-O is the second year of issue for the type but the first year that it was struck at the New Orleans Mint. The coin had a mintage of 855,100 pieces, and is considered a scarce date, although not as scarce as some other dates from the New Orleans Mint from the 1840s. If you compare coins of this date with later dates of this type you notice that the reverse lettering is particularly small, as the reverse lettering increased in size in 1842, creating what some consider a separate type.  You should be able to find a decent Fine for $100 or so.

As with other silver U.S. coinage, the weight of the Liberty Seated half dollar was reduced ever so slightly in 1853. To signify this change arrows were added next to the date that year, and rays were added to the reverse, surrounding the eagle. The following year, the rays were removed, but the arrows stayed until 1855. The 1855 is the final Philadelphia issue of this set of coins with arrows, and is a nice representative of this short-lived type. 759,500 pieces were struck for circulation, and a VF example should certainly be within reach for $100.

Spend a little more: Several obverse dies show signs of a 4 under the last digit of the date. These 1855/4 coins are very popular with variety collectors, especially WB-102, which shows a fully repunched date along with the overdate (see the Cherrypickers Guide excerpt below). Depending on the clarity of the overdate expect to pay around $300 for the coin, which is considered about three times as scarce as the regular issue. 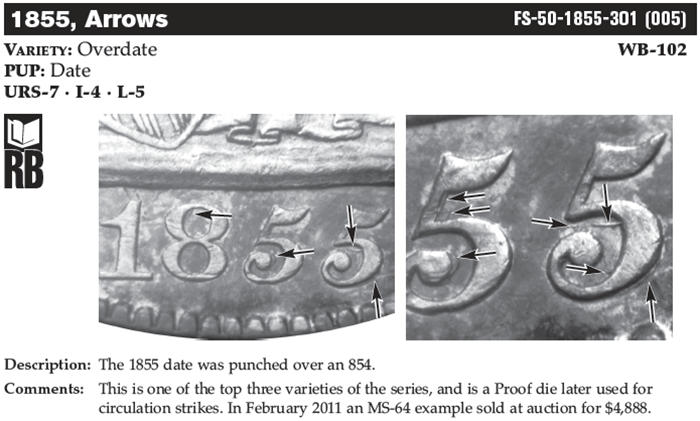 1861 was not only a pivotal year in American history due to the outbreak of the American Civil War, it was also the year that the New Orleans Mint closed as a federal facility. This did not happen, however, until a batch of Liberty Seated half dollars had been struck. Mint records indicate that 2,532,633 pieces were produced, but many of these were struck by Louisiana after it had seceded from the Union, while more were struck when the city was under Confederate control. Research has shown a more-or-less definitive list of which government struck certain 1861-O half dollars, depending on die pairs and die states. Despite this being such a historic coin, it also is quite affordable in circulated grades. Expect to be able to purchase a nice F/VF struck in Louisiana for $100—and while it might take a little bit of time to find one at that price, enough are around that it is not considered to be a scarce coin.

Spend a little more: After the New Orleans Mint closed as a federal facility the Confederacy also used it to strike a very small number of half dollars with a new reverse (four are known to exist). They used an obverse die previously used for coinage production, which can be identified by a minute die crack on the obverse (again, see the Cherrypickers Guide excerpt below). 1861-O half dollars struck by the same obverse die are very popular, but also scarce, and provide a very interesting link between the two issues. Expect to pay about $400 for a VG/F—but if you can fine one, you will have added a very special coin to your collection. 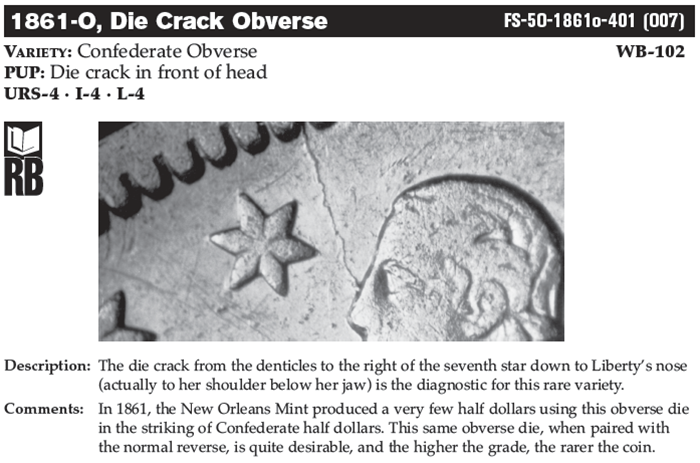 In 1866 the reverse design of the Liberty Seated half dollar was altered slightly by the addition of IN GOD WE TRUST on a scroll above the eagle. This motto had been considered for several years, and various patterns exist with the new motto (or GOD OUR TRUST, an early variant) in plain letters or on a scroll. Both the Philadelphia and San Francisco mints struck this variety in 1866, and while neither issue is particularly rare, the San Francisco issue had a much smaller mintage, with 994,000 pieces struck for circulation. Collectors should be able to find a VF for about $100, and a coin that introduced the American public to the new motto on the half-dollar denomination.

Spend a little more: This issue is actually quite scarce in grades above VF, indicating that few were saved and that many circulated for years before being pulled out of circulation. Although EF’s might be available for about $300, don’t expect to find a nice, original piece easily at that price.

The Carson City Mint is mostly known for its large quantity of Morgan silver dollars struck between 1878 and 1893, but it also produced other denominations, usually in lower quantities. The 1876-CC half dollar, struck in the year of the centennial of American independence, would be a good choice if you are a collector on a budget yet would like to add a Liberty Seated half dollar of this historic mint to your collection. Quite a few are available in circulated condition, and finding a VG-graded piece should not be too difficult with a $100 budget.

Spend a little more: If you want to spend a little bit more money on a higher-graded Liberty Seated half dollar, the 1876-CC might be a good choice. Nice EF’s with original surfaces are not that scarce, but are always in demand with collectors. For about $300 you should be able to find one, and that would provide a lot of coin for the money.   ❑